Attack on 2A Researcher, Dr. John Lott, Rebuffed by Defenders 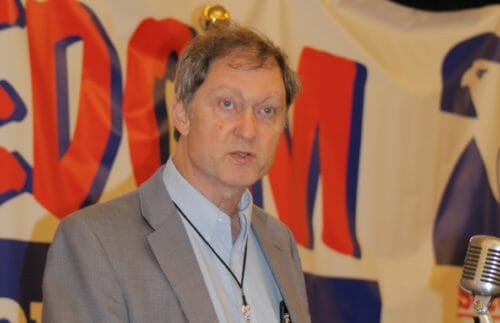 U.S.A. –-(AmmoLand.com)- When a California gun control advocate went on the warpath in The Hill criticizing the hiring of author and firearms researcher John Lott as an advisor to the Justice Department’s Office of Justice program, the reaction was swift in defense of Lott’s work.

Griffin Dix, president of the Oakland/Alameda County Brady Campaign chamber and a former trustee of the Brady organization declared research done by Lott, author of “More Guns, Less Crime” was flawed. Dix said Lott’s “research and conclusions were found to be false by a number of well-respected researchers, such as John Donohue of Stanford; Donohue and Ian Ayers concluded in The Stanford Law Review that Lott’s thesis was “without credible statistical support.” He claimed that Lott’s “track record is cringe-worthy.”

Lott has appeared at several Gun Rights Policy Conferences, explaining his research to always-interested audiences. He founded the Crime Prevention Research Center and authored several books about his firearms-related research.

First came Andrew Pollock, who succeeded Lott as president of the Crime Prevention Research Center in November. He countered, “In this case, it’s true enough that Donahue et al found in a 2003 study that guns were associated with increases in crime. But a review of their work, also published in the Stanford Law Review, argued that Donahue and his partner ‘simply misread their own results … Their own most general specification that breaks down the impact of the law on a year-by-year basis shows large crime-reducing benefits.”

He was followed two days later by Michael R. Weisser, whose short bio notes he “wrote a weekly gun-violence column for Huffington Post and is a Patriot Life Benefactor member of the NRA,” observed this about Dix’s critique: “(It) reflects the continued inability of the gun-control advocacy community to address the fundamental issues that prevent us from making an effective response to the problem of gun violence.”

AmmoLand checked the Stanford Law Review critique (Vol. 55, No. 4 (Apr., 2003), pp. 1313-1369) to which Pollock alluded. Written by Florenz Plassmann and John Whitley, here is what the Abstract said: “Analyzing county-level data for the entire United States from 1977 to 2000, we find annual reductions in murder rates between 1.5% and 2.3% for each additional year that a right-to-carry law is in effect. For the first five years that such a law is in effect, the total benefit from reduced crimes usually ranges between approximately $2 billion and $3 billion per year. Ayres and Donohue have simply misread their own results. Their own most general specification that breaks down the impact of the law on a year-by-year basis shows large crime-reducing benefits. Virtually none of their claims that their county-level hybrid model implies initial significant increases in crime are correct. Overall, the vast majority of their estimates-based on data up to 1997-actually demonstrate that right-to-carry laws produce substantial crime-reducing benefits. We show that their models also do an extremely poor job of predicting the changes in crime rates after 1997.” (Emphasis added.)

Dix lost his 15-year-old son in an “unintentional shooting with a gun that was stored unlocked and loaded” at the home of a friend, according to the brief bio included by The Hill.

Pollock lost his daughter in the Marjorie Stoneman Douglas High School shooting in Parkland, Fla. In his Op-Ed, Pollock contends that two unarmed security staffers who charged at the killer and were fatally wounded might have stopped the mayhem had they been armed.

To his credit, Lott has offered no comment since taking his government job. But that hasn’t stopped Capitol Hill gun prohibitionists from going after him. In a letter to Attorney General William Barr, nine anti-gun lawmakers complain that Lott is “a pro-gun advocate who claims that widespread gun ownership can reduce crime.”

According to Plassmann and Whitley’s Stanford Law Review abstract, Lott’s contentions are more than mere speculation. But, as Alan Gottlieb, founder of the Second Amendment Foundation and co-author of several books* including “Shooting Blanks: Facts Don’t Matter to the Gun Control Crowd” has pointed out, “In a free society there is always room for reasonable, rational and responsible debate of any issue. It is only when the political arguments stray into the realm of agenda fulfillment and philosophical monopoly that perspectives are lost, if not voluntarily abandoned.”

Signing the letter to Barr were Senators Dianne Feinstein, Richard Blumenthal, Patrick Leahy, Sheldon Whitehouse, Christopher Coons, Richard Durbin, Amy Klobuchar, Mazie Hirono and Cory Booker. They evidently do not want someone with Lott’s background to be anywhere near the Justice Department if, or when, it starts doling out dollars for gun control research under a Joe Biden-Kamala Harris administration.

Where Dix asserts upfront, “Trump now seems to be searching for time bombs to put under the doormat for incoming President-elect Joe Biden. One would be to leave Biden with contracts for ‘research’ and programs that mislead Americans and that could actually increase the number of U.S. gun deaths,” Pollock has a different approach and markedly different attitude.

“Rather than attack researchers engaged in the debate,” Pollock suggests, “or try to police who should be allowed to engage in it — we should welcome a diversity of voices and perspectives into the issue of gun control.”

What’s wrong with Pollock’s approach? Apparently plenty, according to Lott’s critics. From a crowd that traditionally cries out for “diversity,” they only seem to want it when all the diverse opinions concur with their own.

Weisser also had a suggestion not likely to be taken well by the gun prohibition lobby.

“If gun-control activists are seriously committed to developing and implementing strategies that will reduce gun violence, they need to stop demonizing John Lott,” he writes.

“Instead, they need to develop a persuasive and effective narrative that will convince gun owners about the risk of owning guns,” Weisser adds. “Until and unless this occurs, gun owners will continue to cite John Lott’s research as one of the reasons why they won’t give up their guns.”

By no small coincidence to this debate comes a report in the New York Post revealing, “Nearly 90 percent of suspects arrested on gun charges this year are back on the streets, which the NYPD says has fueled a historic spike in shootings that have left more than 1,756 dead or wounded.”

But New York City is an environment where it is nearly impossible for honest citizens to qualify for a carry permit, and in the rare cases where the permit is issued, it is prohibitively expensive for average citizens. Maybe that’s why the Second Amendment Foundation and Firearms Policy Coalition recently sued New York City recently in federal court over the city’s restrictive carry permit policies.

It is also because of headline news such as the situation in New York that people across the country won’t give up their guns, either.

(*Alan Gottlieb and author Dave Workman have collaborated on seven books, the most recent being ‘Good Guys with Guns’ published in 2019 by Merril Press, 175 pages, paperback.)

The post Attack on 2A Researcher, Dr. John Lott, Rebuffed by Defenders appeared first on AmmoLand.com.