Too Much Freedom? Trouble Brews When Government Rations Rights 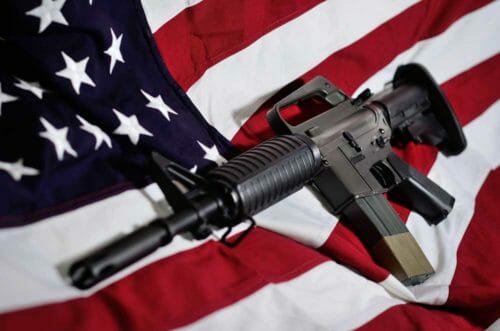 U.S.A. -(AmmoLand.com)- President-elect Joe Biden had a rare moment of clarity when it comes to gun control. He’s got a really big obstacle, called the Constitution.

The president-elect spoke with civil rights leaders in a virtual meeting. An unknown individual recorded the session and the media got a hold of it. What President-elect Biden admitted was enlightening.

Short answer: President-elect Biden knows he’s not a king. He can’t rule over subjects. He must govern his fellow citizens and the document that gives him that authority also limits him from unilaterally grabbing up rights from American citizens – also known as “the People.”

The American Republic was structured this way by the Founders for this very reason. The Executive Branch is charged with running the country, but its authority is checked by the Legislative Branch, or Congress. Its also checked by the Judicial Branch, which itself, is checked by the Executive Branch and Legislative Branch. No single branch of the three pillars of government gets full sway. It’s called the Separation of Powers doctrine. The Founders built it this way so all three are accountable to “the People” who put them in a position to represent their interests and there are checks and balances on each branch of government.

That’s why President-elect Biden also lectured those on his virtual meeting to cool the heated “defund the police” rhetoric. It’s not helping his cause to win over the final two U.S. Senate seats, which would give him a unified Legislative Branch that’s aligned with the goals of the Executive Branch.

In other words, President-elect Biden was telling the civil rights leaders to slow their roll with vilifying cops, so they can get the final seats needed to flip the Senate. Then, they can ram through whatever legislation they want, including blowing up the filibuster, packing the U.S. Supreme Court, and enacting unconstitutional gun control laws.

“I just raise it with you to think about how much do we push between now and January 5 – we need those two seats – about police reform. But I guarantee you, there will be a full-blown commission. I guarantee you it’s a major, major, major element,” President-elect Biden said.

That doesn’t mean an incoming administration is deferring out of respect for the U.S. Constitution. It is just the opposite. He is telling his supporters to lay low, bide their time and those gun control promises from the campaign trail will come if they can deliver U.S. Senate seats allied with their cause.

Gun control supporters are growing impatient. Antigun billionaire Michael Bloomberg’s gun control group Everytown for Gun Safety is demanding a “raft” of gun control immediately. They don’t care about the Constitution, protected rights, or the legislative process. Specifically, they want to criminalize private firearm transfers, regulate precursor firearm parts, and funnel tax dollars into federal studies to back their claims for more gun control. They would have President-elect Biden use Executive Orders to force these changes without the consent of Congress. Just yesterday both President-elect Biden and vice-president-elect Harris called for Congress to pass “common sense” gun control.

One columnist, Bambi Majumdar, appearing on the website MultiBriefs, wrote that Biden-Harris administration gun control is “…not going to be a problem for law-abiding gun owners. The problem would only exist for troublemakers. Biden, a gun owner himself, supports a stricter interpretation of the Second Amendment. His focus isn’t banning all guns but assault weapons…”

Majumdar claims the gun confiscation plans presented on the campaign trail aren’t a problem because they only affecting the owners of the 20 million-plus modern sporting rifles in circulation today, the most popular selling centerfire rifle that’s used daily for lawful purposes. President-elect Biden claimed to own two shotguns – a claim he made when he berated a union worker for questioning his Second Amendment commitments – but no one has seen them. He did once advise people to buy a shotgun, and told his wife, Dr. Jill Biden, to “fire two blasts” if there’s a perceived threat. There are photos of him in a squirt gun battle with his grandchildren. There’s no proof, to our knowledge, he’s part of the gun-owning community.

Majumdar has other infringements both she and the president-elect think aren’t problematic, including rationing gun sales, banning the manufacture, sale, and import of standard capacity magazines, criminalizing private firearm sales, and banning online ammunition and firearm sales, even though those firearm transfers must be completed in a face-to-face transaction with a proceed approval from the FBI. These are among the ideas that are being bantered about for executive action. That means gun control by edict.

Majumdar is wrong, and she knows it. President-elect Biden knows these are radical overreaches of a Chief Executive who would be drafting these orders beyond the scope of his authority. Yet, that’s what he campaigned on. Americans, by his estimation, have too much freedom and need to be reined in. He told America he was the one to do it. Now, he’s being expected to deliver.

When a leader acts alone without the consent of “the People,” it’s dictatorial. It’s despotic. It’s tyranny. Ironically, it is the entire reason the Second Amendment was protected by the Constitution. It’s was to protect the people when a leader ignored their rights.

The post Too Much Freedom? Trouble Brews When Government Rations Rights appeared first on AmmoLand.com.