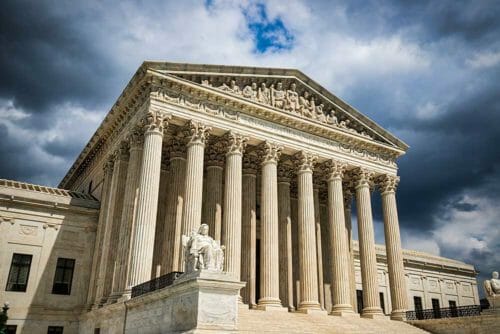 U.S.A. –-(AmmoLand.com)- On 11 December 2020, the Supreme Court of the United States refused to hear the case Texas v. Pennsylvania. The court cited “lack of standing” as the reason. The vote has been reported to be 7-2 with Justice Thomas and Justice Alito dissenting. From the Supreme Court Website:

The State of Texas’s motion for leave to file a bill of complaint is denied for lack of standing under Article III of the Constitution. Texas has not demonstrated a judicially cognizable interest in the manner in which another State conducts its elections. All other pending motions are dismissed as moot. Statement of Justice Alito, with whom Justice Thomas joins: In my view, we do not have discretion to deny the filing of a bill of complaint in a case that falls within our original jurisdiction. See Arizona v. California, 589 U. S. ___ (Feb. 24, 2020) (Thomas, J., dissenting). I would therefore grant the motion to file the bill of complaint but would not grant other relief, and I express no view on any other issue.

It is a devastating decision for President Trump and the Republic. It seems unlikely there are other routes through the Supreme Court to reverse the tainted elections in swing states.

There are other remedies. The electoral college was designed to prevent exactly such a situation, where a recognizable corrupt individual was somehow elected by the popular vote.

However, the Constitution has been so battered by the assault of the Progressives over the last century, that very few checks and balances have much strength any more.

Barring unforeseen miracles or accidents, such as Joe Biden tripping over a dog and cracking his skull instead of his foot, a Biden/Harris or Harris/Biden presidency seems almost certain.

With the election behind us, the Left/Media/Tech Oligarchs/Deep state are covering the Biden corruption story like it just appeared, out of nowhere.

If they had covered the story when it was originally released, it is almost certain Joe Biden would never have been elected. President Trump’s victory would have been exceedingly hard to overcome, even with massive cheating.

The fallout of the Supreme Court not having the courage to do their duty will be large. It is bound to depress voters, at least for a few days, in the critical senatorial runoff elections in Georgia.

A never give up attitude is needed, now more than ever.

The Senate stands as a significant barrier to the United States going all out Venezuela.

Today, the Sean Hannity radio show version on Facebook was throttled back to 19 views from 200,000 for putting out “misleading” information about the election and vote fraud, according to the radio show.

There are still many battles to be fought. This is a setback, but the mask is off. We lost a battle, not the war.

Most of the Left’s power is in its ability to control the information flow.

One of the best things a patriot can do is support platforms that do not censor their political content. Second Amendment supporters need to continue doing what we have been doing for the last 50 years. Building networks, educating friends and relatives and continuing to fight.

Maybe the “Originalists” on the court will feel compelled to protect the Second Amendment. Buck up freedom lovers. Protecting freedom can be hard. It is far preferable to the alternatives.