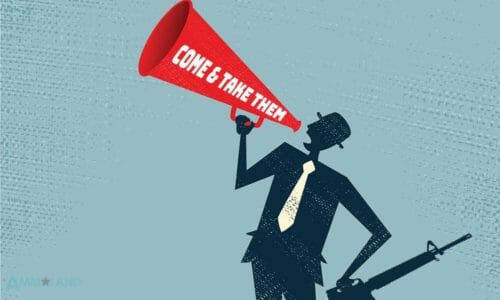 U.S.A. –-(Ammoland.com)-The war on 80% frames continues heating as companies fight back against a rogue federal agency.

As AmmoLand News reported earlier, the ATF raided Polymer 80, seizing computer equipment over its “Buy, Build, Shoot” kits. The agency’s goals appear to be to obtain customer’s personal information. It is unknown precisely what information the ATF was able to retrieve since Polymer80 stored most customer information in the cloud. The company did not hand that access over to the ATF.

At the same time, Polymer80 received a subpoena from the state of California demanding that they turn over customer information. Polymer80 is refusing to comply with the subpoena and is committed to fighting back against the anti-gun state. Polymer80 attorneys told AmmoLand News that the company will fight against California’s legal request and is committed to protecting its customer’s information. The company is still selling and manufacturing 80% frames.

California is suing the ATF over 80% frames and 80% lower receivers., aka “Ghost-Guns”. The state believes that the ATF should consider these items firearms. Gun rights advocates point out that these products cannot fire a projectile and therefore cannot be considered a gun. It still falls on the user to finish the chunk of plastic or aluminum before it is a gun. There is also a long history of Americans making their firearms, and users can print a pistol frame with a 3D printer or simply buy the parts at Home Depot to make a shotgun. The law states that users do not have to serialize their DIY firearms.

The ATF still takes the stance that 80% frames and receivers are not firearms, as evident in internal documents from our sources inside the agency. Still, the agency now suddenly considers an 80% frame bundled with the parts to complete the gun as a firearm even when not assembled. The internal documents falsely claim that a user could put together a weapon in minutes using the kits. The kits require the owner to grind, file, drill, and fit all the pieces before the completed firearm can fire a projectile. That takes more than a few minutes.

Contacts at Brownells.com confirmed that ATF also showed up at the Brownells Iowa office, and other retailers, demanding customer information.

Brownells.com #ad, who did not have the “Buy, Build, Shoot” kits that ATF was targeting, made the point that Brownells would have gone bankrupt in lawyer fees before it complied with this demand.

Brownells told the single ATF agent that visited them that although the company still proudly sells Polymer80 frames that it did not sell the “Buy, Build, Shoot” kits and therefore would not turn over any customer records. The lone agent left without obtaining a single document.

The Firearms Blog reported that the ATF did turn up at a reader’s house and demanded his Polymer80 “Buy, Build, Shoot” kit. The reader did turn over the equipment to the ATF and received a receipt from the agents. AmmoLand News reached out to several high-profile attorneys specializing in firearms to ask if the owner of a “Build, Buy, Shoot” kit could face any type of criminal charges. The lawyers all told AmmoLand News off the record that it would be doubtful that an owner would or could face any charges. They believe that the ATF is most likely using the threat of charges as a fear tactic to force compliance. They suggested that users remain silent and not speak to the agents if they show up at their residence and demand their property.

AmmoLand News has also reported Brady United co-opting a tragic murder to sue Ghost Gunner Inc. and 12 other parts manufacturers over 80% lower receivers. With the ATF, California, and Brady United moving against DIY firearms, some in the gun world believe that these are coordinated attacks. AmmoLand News does have documents showing anti-gun groups in direct communication with several state Governor’s offices. Although none of the documents we have obtained shows anti-gun groups talking about 80% frames or lower receivers, it is still possible.

Gun Owners of America have called for the firing of Acting ATF Director Regina Lombardo. The President still has the power and authority to remove Lombardo as head of the rogue agency.