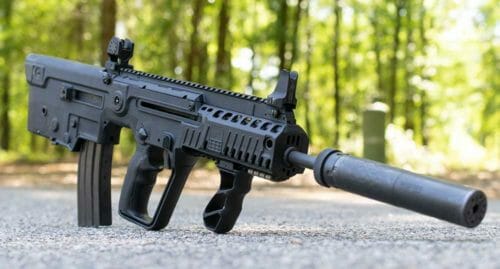 U.S.A. -(AmmoLand.com)- When I first got into modern sporting rifles like the AR-15 in 2004, the backup iron sight (or BUIS) market was very limited. LMT had a set, so did Knights Armorment, and plenty of people simply cut down detachable carry handles. And while all of these worked, more and more companies entered the fray with their own variations.

As development continued these became increasingly complex, and as a result, more expensive. And while I exclusively choose folding BUIS setups for use with magnified optics, for reflex sights, I actually prefer fixed options. But only if they still offer the vast majority of the original optic’s sight picture. In the course of my search for one such BUIS, I came across the Midwest Industries Combat Rifle Rear Fixed Sight (Model #MI-CBUIS).

The Midwest Industries CBUIS is a rock-solid sight milled from T6 6061 billet aluminum. Despite this, the BUIS only weighs 1.98oz according to my digital food scale – so I’ll assume it’s 2oz. While this is almost twice as heavy as Magpul’s polymer BUIS, it’s still impressive for a billet aluminum component. Normally, a sight built from billet would be much heavier, but the engineers at Midwest did a great job with their lightening cuts and partial skeletonization of the base.

The Combat BUIS is adjustable for windage alone. The sight utilizes an M16A1-style adjustment dial that moves the point of impact 0.5 minutes of angle per click. Unlike the A2, this A1-pattern dial requires either a special tool or a single 5.56mm cartridge to adjust. According to MI, they chose this style over an A2 knob because it’s slimmer, and less likely to snag or hang on clothing or equipment while being carried.

Inside the housing, the MI fixed BUIS features a pair of mil-spec aperture “peep” sights. Just like on an M16, there is a larger diameter sight for close range and low light conditions, and a smaller peep or ghost ring for longer range targets. Both work great, but when zeroing your sights, be sure to use the smaller one for added precision.

One neat effect of peep sights is that they artificially increase a human eye’s depth of field. Permitting us to see not just our front sight post, but also our target with relative clarity. It’s an ingenious design, and one that is still very effective – even if a shooter requires a mild prescription of corrective lenses.

When I first opened the box containing the BUIS, I was actually surprised to see that it lacked an Allen key. But once I turned it over, the lack of a key made total sense. The Midwest Industries fixed BUIS uses a flat head machine screw to secure itself to a Picatinny rail slot. In testing, this holds up fine provided the shooter uses the recommend torq specs of around 30 foot-lbs. If you lack a torque wrench, I’ve found that a rough equivalent to this is to crank down the screw an eighth of a rotation past tight or snug.

While I primarily recommend shooters use these sights as a standalone aiming device, they do work great with reflex sights. While not a true co-witness, they do provide lower third co-witness, which in my opinion is ideal if the iron sights cannot fold away.

Overall, the Midwest Industries fixed combat BUIS makes for a solid, reliable aiming device. They lack some of the creature comforts of more pricy options, but if a shooter needs super-durable irons not made in China for a reasonable price, look no further.