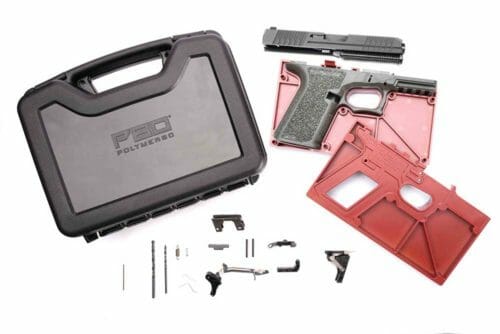 The federal agency is demanding the customer information of those that purchased the kits.

The apparent change in the regulations according to ATF internal documents obtained by AmmoLand News shows that the agency blames the rise of crimes using built from 80% frames. The documents also claim that “Federal courts have repeatedly held that GCA’s ‘firearms’ definition applies to a collection of unassembled firearms parts, including firearms’ parts kits.’”

The ATF also states that the “Build, Buy, Shoot” kits are firearms because “the kits are designed to, or may readily be converted to expel a projectile.” In just the last 90 days, ATF has said that certain pistols may be “too long” or “too heavy” to be importable. Next, they noted that pistol braces were not permissible unless the company submits every single variation for classification.

Now they are saying that 80% frames and receivers “require case-by-case analysis that is dependent on the facts.” In other words, ATF continues to go out of its way to provide the industry with vague and ambiguous standards that no one can reasonably follow. Someone once said that “The essence of tyranny is not iron law. It is capricious law.” That is Bureau of Alcohol Tobacco Firearms & Explosives in a nutshell. No law-abiding company has any idea how ATF will apply the rules until a SWAT team bangs on the door. And that’s precisely the way the agency wants it.

According to the documents, if an inspector sees a “Build, Buy, Shoot” kit on the shelf of a gun store, they are supposed to call the area supervisor so they can arrange for a special agent to respond. The FFL will be instructed not to transfer or dispose of the kit and will be asked to surrender the product to the ATF. If a special agent finds the kit, they will decide “whether it is appropriate to begin a criminal investigation regarding that kit.”

One of the companies that the ATF paid a visit to was Brownells.com. Although Brownells does sell the Polymer 80% frame kits in question. The visit by the ATF agent/s was reported as not hostile. A simple search of the Brownells.com website would have told ATF that information and saved them the trip that produced them nothing.

“The ATF did visit our facility on Thursday, December 10, 2020,” said Ryan Repp, Brownells VP of Marketing. “It’s my understanding they inquired about our sales of the Polymer 80 ‘Buy, Build, Shoot’ kit. Brownells has not and does not sell that kit. Polymer 80 continues to be a great partner for Brownells. We proudly sell their 80% products and other parts.”

The ATF did raid or show up at other companies that sell other kits that include 80% part kits, barrels, and slides that are not Polymer80. AmmoLand News sources inside the ATF say that the agency is now considering 80% kits with all the parts needed to finish a pistol as a firearm. None of the companies had any warning on the change to ATF’s regulations before actual agents showed up making attempts to retrieve customer information.

The ATF is interested in the customer records, and this seems to be a nationwide crackdown. The agency’s intent on acquiring customer’s personal records and run criminal background against the list to see if any felons have purchased the 80% frame. The ATF is making a de facto 80% gun registration.

Local ATF field offices are responsible for executing the orders in any way they see if. This order can be a full-on raid or a single field agent. The order is coming from the top brass at the ATF at the LA field office’s behest.

Gun Owners of America is aware of the situation and believes the ATF’s goal is to build a list of gun owners and punish the kits’ sellers. Gun Owners of American Senior Vice President Erich Pratt views this action as just one more overstep of the ATF.

“Americans have been making their own firearms since the foundation of our country,” said Pratt. “And while technology advances, rights do not change. The ATF’s decision to raid or threaten peaceful businesses is the agency’s latest rogue action in a long line of abuses. Honest citizens should enjoy the right to assemble their own firearms for lawful purposes, and they should be able to do so without being terrorized by their government.”

This is a fast-developing situation, and AmmoLand News will be closely monitoring changing events.

The post ATF Internal Leaks Shows An Even Greater Crack Down On 80% Frames ~ VIDEO appeared first on AmmoLand.com.