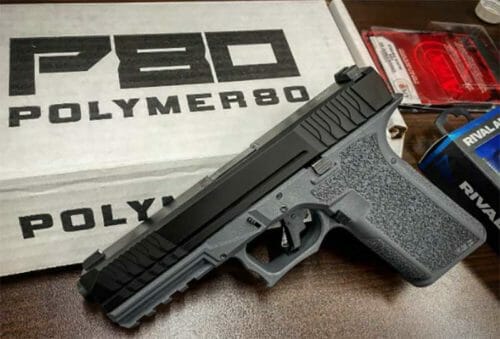 USA – -(AmmoLand.com)- Some thoughts on the news that the BATFE has raided Polymer80, Inc.

Polymer80, Inc. sells many different products directly as well as through retailers, including many different kits, parts, and even complete (serialized) firearms. I am a fan of the company and I have recently been advocating for gun owners to seriously consider going through the experience of building their own gun so that they familiarize themselves more with how guns operate.

Polymer80’s “Buy, Build, Shoot” kits come with the same type of plastic non-firearm as their traditional DIY kits, but also includes all the parts necessary to complete a gun AFTER an individual puts in the work to make a pistol frame themselves.

The raid on Polymer80 on December 10th, 2020 appears to be related to the difference between their Frame Only kits and their “Buy, Build, Shoot” kits which ship with all of the necessary parts and tools to complete a pistol in one convenient package. Polymer80 does also sell complete serialized guns. The differences between those kits and parts are shown in this video I posted to Instagram earlier this morning:

According to an article in the Wall Street Journal, this situation is very much like the situation with the manufacturer Q back in October:

“The ATF previously gave Polymer80 permission to sell unfinished receivers. But the Buy Build Shoot Kits, which are advertised as having “all the necessary components to build a complete…pistol” weren’t submitted to the agency for approval, according to the application for the search warrant. These kits can be “assembled into fully functional firearms in a matter of minutes,” the warrant application says.”

The arbitrary and subjective nature of BATFE rule interpretation and application has long been a problem for the gun industry.

We have addressed these issues in several position statements through Second Amendment Organization at gunrights.info. Cleaning up (or abolishing entirely) the BATFE is an agenda item for gun owners. Many of us have been frustrated by the lack of action from the Whitehouse over the past few months in regard to the BATFE apparently stepping up an enforcement action, especially in the gray areas that exist around items like pistol braces and “80% Kits”, both of which have long been contentious items that have been plagued by a lack of regulatory clarity.

While I have been interested I the process for years, I only built my first Polymer80 kit pistol a couple of months ago. Don Edwards (Greenline Tactical) and I spent a couple of hours independently building our own guns from frame kits at Ancient City Shooting Range in St. Augustine, Florida, and posted this video after our first live-fire range session.

Just last week, I hosted a TeamBUILDING event at Reno Guns & Range in NV for my I.C.E. Training Company Leadership one evening during an Instructor Development work. During this event, many participants built their own guns, including some that were built from the “buy, build, shoot” kits that are apparently now under closer scrutiny by the BATFE.

This is a Developing Story and I’m sure that we will learn more details in the future. In the meantime: Get your DIY gun kits while you (definitely) can.

Rob Pincus has been educating people about defensive shooting and related personal defense topics for over two decades. He is the Executive Director of the Personal Defense Network and the owner of I.C.E. Training Company. He has authored several books, produced over 100 training DVDs, appeared on several TV & Radio shows, and trained military, law enforcement, and armed individuals around the world. His advice focuses on efficiency and practicality based on his own experiences and continuing research of both real-world events and cutting edge training practices. www.icetraining.us

The post Motivation Behind ATF’s Raid of Polymer 80 ~ VIDEOS appeared first on AmmoLand.com.