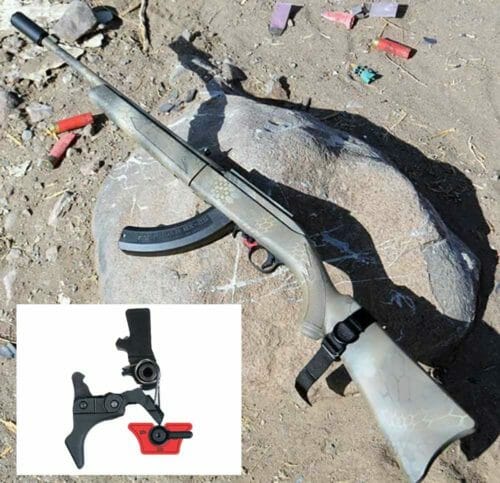 U.S.A. –-(AmmoLand.com)- Earlier in 2020 I had a chance to shoot a Ruger 10/22 with a Franklin Armory BFS III 22-C1 and had more fun than I ever thought possible with a Ruger 10/22. It was a prototype trigger at the time, but I saw its potential. If you are new to the scene, the BFS III is a binary trigger that has three settings: Safe, semi-auto and binary. The binary setting fires one shot when the trigger is pulled and a second shot on the release when the trigger moves forward again.

Franklin Armory has offered these triggers for a number of platforms including the AR-15, AK-47, and various other models from B&T, Bushmaster, H&K, CZ, etc. Aside from installing a BFS III in an S&W M&P 15-22 or running a 22 conversion kit in your AR, there was almost nothing out there for 22 plinkers.

A few months ago, this trigger was officially released and Franklin Armory kindly sent me a sample which I installed in one of my 10/22s.

In addition to the Ruger 10/22 this trigger will fit the Ruger Charger pistol, Magnum Research MLR rifles, custom-built rifles using the Brownells BLR-22, and receivers from Volquartsen, Tactical Innovations and Tactical Solutions.

Installation is just a little bit more than replacing your factory 10/22 trigger with a new one. Most significant will be installing the new “selector”.

The Ruger 10/22 uses a cross-bolt safety mounted in the trigger guard. Obviously, this would pose a challenge to using the existing safety with a binary trigger as you need three positions to make it work. The engineers at Franklin Armory redesigned this into a three-position ambidextrous safety and selector. To the rear for safe, straight down for semi-auto and forward for binary mode.

Franklin Armory includes a bright red sticker to affix to your 10/22 in order to remind you which setting does what.

I installed the BFS III 22-C1 in my Ruger 10/22 Takedown model with a threaded barrel. This is mainly because the only thing that is more fun than shooting a binary trigger as fast as you can is to do it while suppressed.

There is a bit of a learning curve to shooting with a binary trigger. Many shooters tend to overthink it and consciously think “Pull and release” with a pause between each of those words. Many times they walk away feeling that they wasted their money.

My suggestion is to just shoot as fast as you can and let the rifle surprise you. Although rimfire rifles can be some of the fastest rounds with which you can shoot in binary mode, you will not outrun the bolt.

The reason 22 LR is so fast is because of the extremely short distance that the bolt must travel forward and rearward. This is why many full auto shooters try to find room for a 22 LR machinegun or at least a conversion kit.

If you like shooting in binary mode or are binary-curious, this might be a good one to look into. Some of the stuffed shirt types who read this might be wondering about “purpose” or “mission needs” and some of the gomers will be whining about wasting ammo.

Sometimes you can have more fun wasting ammo and shooting water jugs in an hour than those types have had since childhood.

Pricing on this new trigger is $299.99. For more information check out Franklin Armory.