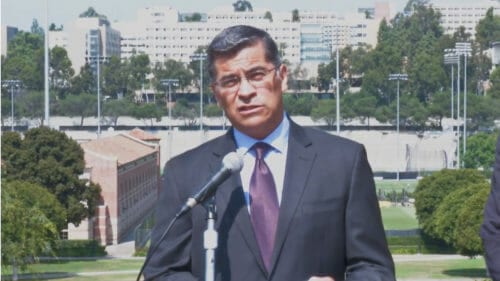 U.S.A. –-(AmmoLand.com)- Democrat Joe Biden sent another strong signal about the direction on guns his administration will take by announcing his pick to head the Department of Health and Human Services is Xavier Becerra, the anti-gun California attorney general who replaced another gun prohibitionist, Kamala Harris, when she was elected to the U.S. Senate.

Becerra is the defendant in several ongoing gun rights lawsuits filed by the Second Amendment Foundation, Firearms Policy Coalition, and others. He’s been sued at least five times by SAF.

If he is confirmed as HHS Secretary next year, he will be in a position to put the full force of the federal government behind the notion that guns are a health risk.

Various anti-Second Amendment groups have been crusading for years to declare “gun violence” a public health crisis. None of these groups ever seem to create a ripple in the news when there is a fatal stabbing or someone is bludgeoned to death. Becerra would likely get plenty of support from such organizations.

But he may have trouble being confirmed depending upon the outcome of the double Senate election in Georgia on January 5th. If Republican incumbents Kelly Loeffler and David Perdue are re-elected, it gives the GOP a thin majority. Republican Sen. Tom Cotton of Alabama already said he will vote against confirming Becerra.

Fox News is reporting “Republicans slammed President-elect Joe Biden after he announced his choice of California Attorney General Xavier Becerra for secretary of Health and Human Services on Monday, and they criticized Becerra’s record on abortion and other issues.”

Conservative groups such as the Alliance Defending Freedom and the Susan B. Anthony List has labeled Becerra an “extremist,” Fox added. Religious leaders are also slamming the choice, again on the abortion issue.

In September, Becerra’s office made a big splash with the announcement that he was leading a “coalition” including the anti-gun Giffords Law Center to Prevent Gun Violence “in filing a lawsuit against the Trump Administration demanding the U.S. Bureau of Alcohol, Tobacco, Firearms and Explosives (ATF) correct its interpretation of what qualifies as a firearm.”

The lawsuit is aimed at defining so-called “80 percent” frames as firearms.

“After four years of Donald Trump, Americans desperately need strong leadership from the top to confront public health crises like the coronavirus pandemic and gun violence,” Ambler said in a prepared statement. “Xavier Becerra is a superb choice to take charge of Health & Human Services, which will have one of the most critical missions in the Biden-Harris Administration. Becerra has an impressive record of taking action to protect and improve public health, he’s been a partner in the fight against gun violence, never backing down from special interests like the gun lobby in his mission to save lives. We look forward to working with him and the rest of the cabinet to address gun violence.”

No doubt most of the resistance to Becerra will relate to the abortion issue, but Becerra would remain no friend to American gun owners as head of HHS.

Last year, when a killer opened fire at the annual Garlic Festival in Gilroy with a semi-auto rifle he brought from neighboring Nevada, Becerra lamented “We cannot enforce California laws in Nevada.”

At the time, KGO reported that despite California’s restrictive gun control laws prohibiting the sale or import of so-called “assault rifles” into the state, “the suspected gunman brought one into the state.”

Gun rights activists shook their heads because the media, and Becerra, missed the point entirely. Determined killers will ignore gun control laws and find ways to commit their heinous acts. Transporting the gun into California simply underscored the problem with such laws: They don’t really prevent crimes.

While he was in the state assembly representing California’s Legislative District 31, Democrat Becerra voted against legislation prohibiting junk lawsuits against gun manufacturers for crimes committed by third parties misusing their firearms. He voted against reducing the waiting period for firearms purchases from three days to one day. He was rated “F” by the National Rifle Association.

Biden is in the midst of picking people to fill his cabinet positions as the possibility of any reversal of the election grows increasingly remote. Over the weekend, President Trump traveled to Georgia in an effort to get out the vote for Loeffler and Perdue, while insisting he won the state and contending he won elsewhere.