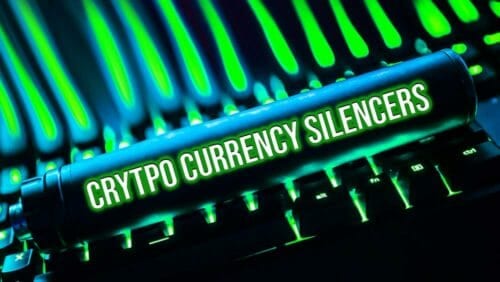 U.S.A. –-(Ammoland.com)- Crypto currency, the answer to what will happen when credit card companies block gun stores and online vendors from using credit cards as payment?

With credit card processors like Swipe and PayPal dropping gun websites and pressure mounting on other companies, it is only a matter of time before it will not be possible to buy firearms-related products using credit cards. As Second Amendment advocates, we need to find a way around these possible future restrictions.

Luckily for us, the decentralization of currency through using Bitcoin or the gun-friendly TUSC has given us an option. Cryptocurrency doesn’t have a government in control like a fiat currency. No one can easily shut down digital currencies. It went from fringe to mainstream in only a few years. Through crypto exchanges like Coinbase, a user can exchange USD for various digital currencies.

Since cryptocurrency doesn’t have a processor like a credit card, it is impossible to prevent a user from buying guns or gun parts. This freedom is where the power of decentralization will stop the shutdown of gun sites by being blacklist by companies that bend a knee to the anti-gun lobby.

There are a few firearms-related companies already accepting cryptocurrency. I decided to see how easy it is to use cryptocurrency to buy a firearm. Instead of purchasing a gun from a website using Bitcoin, I decided to buy a suppressor from Rex Silentium. It was straightforward to do.

The first thing I had to do was open an account on an exchange. I chose to use Coinbase because it is one of the biggest exchanges in the world, and it gives you a wallet that makes it easy to trade in multiple Crypto currencies. I filled out some documents to prove my identity. It is worth noting there are ways to acquire crypto currencies without providing ID, including bitcoin ATMs.

A wallet is where a user stores their crypto currency. Think of it as your bank account. It contains your public key and private key. The private key allows you access to the coins, and the public key is where people can send you coin. Coins can be stored online, on a device like a flash drive ledger, or paper (known as cold storage).

The Winklevoss twins owned 100s of millions of dollars of Bitcoin stored on a piece of paper. They split the paper into three parts and placed each piece of paper in small banks’ safety deposit boxes across the country. They believed it would be safe because for someone to steal the money, a criminal would have to break into three boxes in different corners of the country.

The next step was easy. I picked the suppressor I wanted from the Rex Silentium website. I went with an MG7 K Rifle Suppressor. I chose the Bitcoin option for payment and scanned the QR code from my Coinbase app. I typed in the amount I wanted to pay, and then I hit send. I transferred my Bitcoin from my wallet to the Rex Silentium wallet. Ten minutes later, I got an email from Rex Silentium stating the company received the Bitcoin, and they processed my order.

A few days later my suppressor showed up at Sterling Arsenal. I went into the gun shop and filled out all the paperwork, paid my tax stamp, got my picture taken, and was fingerprinted. Everything here was just like the traditional way of buying a suppressor. To Sterling Arsenal, it was just like any other transaction. Now I am in the waiting period for the ATF to do their part. That part should be quick since the ATF heads already know me.

I contacted the owner of Rex Silentium, Steve Lovas, to find out why he accepts Bitcoin. He told me his reasoning was twofold. He said he likes to hold bitcoin as an investment, and he also thinks that the credit card monopiles will eventually block the purchase of guns and gun-related products.

“The credit card companies are private companies and can tell the processors not to accept credit cards for gun-related purchases,” Lovas said. “We have and had it happened to us. It is like the Sword of Damocles. We had to change processors a few times because they dropped gun products.”

The only weakness of most cryptocurrencies that the transaction isn’t instant. It can take about ten minutes in most cases. This wait isn’t a big deal for most internet purchases, but it does limit the usefulness of using cryptocurrencies in brick and mortar stores.

“Bitcoin is great, but it is more of digital gold,” McNealy said. “It is also very slow to process a transaction, so it doesn’t work in a retail environment very well. It takes anywhere from 10 mins to several hours for a Bitcoin transaction to process. We built TUSC with retail in mind, so it’s fast. With TUSC, it only takes a few seconds to process a transaction. With Bitcoin, the fees always fluctuate and can be expensive during busy periods. With TUSC, fees are always 1/2% for a sale or a flat fee of 50 TUSC for a direct wallet to wallet transfer, which is only a few fractions of a penny right now.”

Right now, Cryptocurrencies are a way to purchase guns and gun parts without putting money into the pockets of anti-gun companies. Eventually, it will not be a choice. It will become the only way to pay for firearms over the internet.