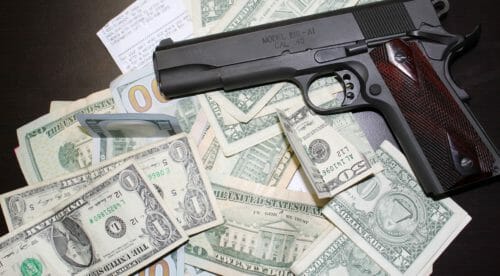 U.S.A. –-(AmmoLand.com)- The National Shooting Sports Foundation reported an increase of 45.2 percent in the NSSF-adjusted background checks initiated with the National Instant Criminal Background Check System (NICS) over November of 2019, as gun sales continue to soar.

According to the industry umbrella group, “The year-to-date total of 19.1 million adjusted background checks continues to add to a record-setting year for firearm sales. The previous complete annual record of 15.7 million background checks was set in 2016. NSSF retailer surveys estimate that nearly 7.7 million people purchased a firearm for the first time in 2020.”

Gun sales started climbing dramatically with the onset of the coronavirus pandemic in late February and early March, and they became stronger as several major cities erupted in violent protests following the May death of George Floyd while under Minneapolis police restraint. Those protests were quickly exploited by Antifa anarchists, turning into riots in several cases, with demands that police departments lose funding and have their manpower reduced.

Even former President Barack Obama criticized the movement to “de-fund” police, according to Fox News.

Speaking to proponents of reducing police budgets and manpower, Obama observed, “You lost a big audience the minute you say it.”

While all this was happening, the Minneapolis City Council was proposing cuts to that city’s police department under the guise of a new “Safety for All” budget plan, according to KSTP News.

The Chicago City Council was being flooded with demands for huge cuts in the police department budget. According to Injustice Watch, Mayor Lori Lightfoot has declared there be no massive cuts “or policy changes that inhibit the core mission of the police department, which is to serve and protect us all.”

Seattle’s far-left city council okayed an 18 percent cut to that city’s police budget, virtually at the same time Fox News was reporting a spike in homicides that is one killing shy of doubling the entire murder count for 2019. Last year, 28 people were murdered in the city, while this year’s body count is 55 with a month remaining in the year.

Mark Oliva, NSSF director of Public Affairs, “November background checks are in line with what we’ve seen all year long. Americans continue to purchase firearms at a record pace for a variety of reasons, including concerns for personal safety, onerous gun control plans by a Biden-Harris administration, and for lawful purposes including recreational shooting, hunting, and self-defense.

“The fact that the pace of these sales hasn’t slowed since March shows Americans value their Second Amendment freedoms and will exercise the right to keep and bear arms at their choosing,” Oliva added. “Politicians looking for a mandate on firearms should examine the record setting figures Americans are posting every month with firearm sales. Americans have told their elected representatives more than 19 million times exactly where their voters stand when it comes to their rights, more than 7.5 million making that declaration publicly for the first time in their lives.”

With perennial anti-gun Democrat, Joe Biden poised to assume the presidency in January, gun owners and run rights organizations are bracing for battle. Indeed, they are already taking the fight to gun control governments in Maryland, New York City, and New Jersey.

And the SAF-CCRKBA-FPC triumvirate is also challenging California’s expansion of its restrictive “handgun roster” law that prevents the sale of many handgun models in the Golden State.

As noted in these columns previously, perhaps Donald Trump’s greatest legacy will be how he feverishly filled federal court vacancies and added three constitutional justices to the Supreme Court, perhaps breaking the logjam to bring more Second Amendment cases up for high court consideration. Time will tell.