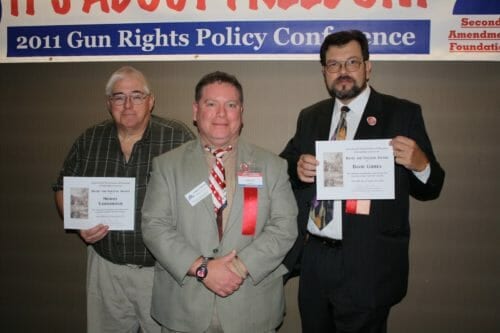 U.S.A. – -(Ammoland.com)- “Lives lost to suicide are not as important as the public’s right to purchase firearms promptly, said Charles Heller, co-founder and spokesman for the Arizona Citizens Defense League,” the Arizona Daily Star cited Sunday in a report attempting to tie a university student suicide in with “same-day gun sales.”

That sounds pretty callous, doesn’t it? You’d think a seasoned advocate like Heller, a longtime radio host and AzCDL’s media coordinator, would be sensitive to that and more skilled at making his point without alienating people with such overt indifference to human tragedy.

That is if Heller actually said it. He actually didn’t.

“[Arizona Daily Star reporter Carol Ann Alaimo] made up a quote from me out of whole cloth,” Heller unequivocally declares at Liberty Watch Radio. “That quote is a lie.”

“I NEVER said that, or anything close to it,” Heller insisted in his letter to Jill Jordan Spitz, the Daily Star’s editor, in his demand for a correction and retraction. “What I said, verbatim, was:

“[T]here isn’t any excuse for infringing a right. You don’t say, well you know, a few more people might not kill themselves, so we’re going to infringe everybody else’s rights, who don’t kill themselves.”

What [Alaimo] did there is not a misquote,” Heller continued. “It is attributing to me something I never said. it is an outright fabrication…”

So, good luck proving it? He said she said?

Hardly. Heller let the reporter know at the outset he was recording their conversation and he has now posted it for all to hear for themselves.

As an aside, and with the disclosure that I know Charles, I have met him several times at events, been a guest on his program, and consider him a colleague and a friend, I’m once more impressed with how well he handles himself in impromptu conversation. It ain’t easy, although his depth and breadth of knowledge make it sound that way.

“That is an egregious case of malfeasant journalism. It is also a stunning example of a framing bias,” Heller elaborated in his complaint to Spitz. “Furthermore, and worse, it defames me in asserting that I, or The Arizona Citizens Defense League, care more about the speed of purchase of a firearm than the lives of the people buying them. This is DAMAGE to the reputation of the group and myself, as some people will be fooled into believing that I actually said that.”

Why wouldn’t they believe it? Most will never see Heller’s rebuttal or read this article. We’re dealing with a newspaper that reportedly has hundreds of thousands of readers. Unless the editor honors his demand for a retraction/admission and a 600-word op-ed to correct the record, the prevailing thought will be that he, and by default, all non-comprising Second Amendment advocates, are heartless, selfish, and indifferent to human tragedy. In fact, if you listen to what he really said, his advocacy was insightful, rational, humane, and respectful of rights.

Obviously, no one can force the newspaper to do this, but perhaps it can be pressured. Once this is posted, I’m going to post the link as a reply to the Daily Star’s Twitter (78.8K account followers) and Facebook ( 149,382 account followers) article announcements and invite those of you who have accounts there to join me.