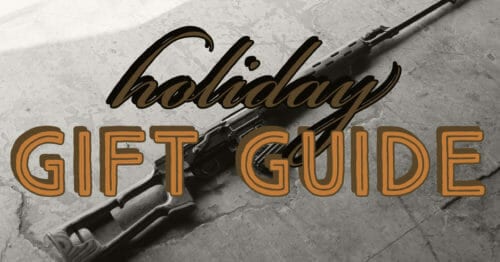 U.S.A. –-(Ammoland.com)- Christmas is coming up, and everyone is looking for last-minute gifts or maybe getting themselves a little something extra. As a gun guy myself, I know that not all gifts for us have to be firearms. I also know that budgets vary widely, so I made a guide with five different items at different price points that range from $25 to $16,000.

The first item on my list is by XTECH Tactical. XTECH is known for its quality AK products, but this product is for the venerable AR-15.

Until the recent ammo crunch, I would go through 1000 rounds of .223/5.56 every month. With all the reloading I have done, I needed to find a way to load magazines quickly and easily. In the past, I have used a Caldwell speedloader or a Podavach speed loader. These speed loaders are great, but I don’t want to bring them to the range where I have limited space. I have to load magazines at home before heading out to plant freedom seeds. That is 10 to 20 magazines per trip I have to carry in my range bag.

But I found the XTECH Tactical AR-15 Speedmag. This magazine enables me to load my magazine at the range quickly. Instead of loading one round at a time, I can drop in four or five. The magazine works by the user pulling down on a plastic ring, which pulls down the propriety follower and compresses the stainless-steel spring. It is similar to how a lot of .22LR magazines work.

I have been using the Speedmag for over a year now and have put thousands of rounds through it. I have used it without any issues. I was lucky enough to get my hands on a prototype back then and used it almost exclusively for six months. I have a few production models, and they also work great. Now I take four preloaded standard magazines and one Speedmag to the range with me.

The only two downsides are that the spring is exposed, and the propriety follower increases magazine length. The base plate is removable for easy cleaning, but I wouldn’t want it to be my only magazine in an SHTF situation, but it is excellent for the range and practice. Figuring in the price of a magazine and a quality speed loader, it is worth the money.

5.11 is one of my favorite companies. They make a wide variety of clothing, bags, shoes, and other gear. One thing that is certain with 5.11 products is that the company builds them to last.

I do a lot of hiking, day trips, and travel frequently. It comes with being the father of a Cub Scout and a journalist. When I go out for a day hike, I need bags to carry everything from first aid kits to snacks. I have a 5.11 Rush 100 for my overnight trips, but I don’t take that on a small hike or when I travel. It is just a little too big for those uses.

For those occasions, I use my 5.11 Rush MOAB Sling Pack. The MOAB is an ambidextrous single shoulder strap bag. It has a small footprint but does boast 18 liters of total space. That is enough space for everything I need for a day hike or traveling. 5.11 even built in a pocket for a 1.5-liter hydration bladder, which is excellent for hiking.

5.11 really paid attention to detail on the bag. Being a part-time eyeglasses wearer (needed for distance), I like the fleece-lined sunglass pocket. This pocket allows me a place to store my glasses when I am inside without having to worry about getting the lenses scratched. Another cool thing is that the user can expand the bag by using the 5.11 Tier System or merely using the MOLLE web exterior.

Of course, it is 5.11, so you should expect it to be duty ready, and the company designed it for that purpose. 5.11 made it out of a super tough yet lightweight 1050D nylon material. 5.11 also applied a water-resistant treatment to the bag. There is a coms pocket pass-through cord slot. I don’t use that much, but I do use all the other features of this bag.

Mantis is the Telsa of the gun world. Reviewers, including me, have praised their products for years. Their MantisX has personally made me a better shooter, or in their words, “suck less.”

MantisX saw the need for a system to help dry firing an AR-15 and released the Mantis Blackbeard. The Blackbeard is a device that resets the trigger of the rifle when the shooter is dry firing. Not only does the device reset the trigger, but when the user pulls the trigger, a laser is turned on so you can check your aim and center your rifle. There is no need to take your finger off the trigger to pull the charging handle for follow up shots. The recoil isn’t there, but everything else feels right.

The shooter replaces their BCG and charging handle with the Blackbeard. Mantis designed the battery to look like a magazine, and the shooter inserts it into the mag well. From there, the user fires their AR-15 like they would at the range at a target. The battery lasts all day and uses a standard micro USB charger.

The Blackbeard also works with all the popular shot tracking apps that work with other laser products like SIRT pistols. We all need to train as much as possible, but the ammo crunch prevents many people from getting to the range. It isn’t only the cost of ammunition but also the availability of rounds that is causing problems.

When the selector switch is in position three, every time the shooter pulls the trigger, a round is fired. When the shooter releases the trigger, the firearm fires another round. The shooter can achieve a high rate of fire while maintaining pretty good control of the gun. It is the closest thing to a machine gun that we plebes can own without spending thousands of dollars and waiting over a year.

I had a Franklin Armory BFSIII AR-C1 in my AR for quite some time, and the trigger impressed me. I was afraid that I would outrun the bolt, but I didn’t. I wanted a binary trigger from my CZ Scorpion EVO 3 for a while. I settled on the BFSIII CZ-C1 because of my experience in the past with Franklin Armory binary triggers. Boy, did I make the right decision?

The install can be easier or harder, depending on when you bought your Scorpion. CZ wielded the trigger pack in place for the older Scorpions. Luckily websites make kits with drill bits that break off the wielded screw’s head so the user can remove the trigger pack. It wasn’t a big deal and well worth the little extra work to replace the trigger pack with the BFSIII CZ-C1. Not only does it have a binary setting, but it is also an overall better trigger than the stock CZ trigger.

Now, this watch is the ultimate gift for the gun guy. Famous Artist and gun guy Zaxxr founded Peace Times 38. Zaxxr’s art can be found everywhere, from Brazil to Dubai. The company gives half its profits to Charity. These charities range from helping provide clean water in impoverished nations to anti-violence programs (no control groups need to apply).

The watches are handmade in the US by Zaxxr using Swiss movements. The artist takes cylinders from .357 Colt Revolvers that are beyond repair and makes the watch housings. The watch is uniquely American, and for a good reason. Two WWII veterans inspired Zaxxr to create his watches. One veteran spent the war in a Japanese POW camp, and the other helped transport the bomb that ended the war. He saw the freedom they fought for, including the Second Amendment, and wanted to honor them.

Zaxxr only makes nine Sao Paulo a year, so there is no fear that everyone will have the same watch as you. The quality is insane. Everything is exact and flawless. If you want to stand out in a crowd of gun guys and wear a watch made by a world-renowned artist and Second Amendment supporter, then this is the gift for you.

Whether you choose one of these gifts or something else, you can also buy someone a membership in a local or national 2A group. That way, you can help protect their rights and yours.

The post Holiday Gift Guide For The Gun Guy appeared first on AmmoLand.com.