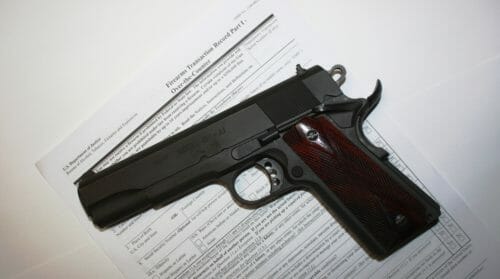 U.S.A. –-(AmmoLand.com)- November of 2020 continued the trend of record-breaking gun sales and record-breaking National Instant background Check System (NICS) checks. The two are not the same. About half of background checks in recent years are done for other purposes, such as gun permits and gun permit rechecks. Permit and permit rechecks have slowed somewhat in relation to gun sales in 2020, probably due to some states’ deliberate slowing or stopping of gun permits because of the COVID 19 overreaction.

The number of gun sales, according to the formula, handguns + long guns + other + 2.5x multiple sales = total gun sales, was 1,920,155. The number is an approximation. Not all gun sales require NICS checks, and the multiple numbers is uncertain because a single NICS check is done for multiple firearms on one form.

The previous record of firearm sales for November was in 2016, with about 1.623 million sales.

The total number of sales for 2020 is almost certain to be more than 20 million firearms, an all-time record for a year, increasing the private stock of firearms in the United States by about 4% when the gun sales for 2020 are included.

According to my calculations, using the methods pioneered by Newton and Zimring, and extended by Gary Kleck in “Point Blank: Guns and Violence in America” by Gary Kleck, Table 2.1., the number of privately owned firearms is now a fraction short of 460 million in the United States.

More definitive numbers will come out in about a year, as the ATF publishes manufacturing, import, and export data. NICS numbers are a proxy for those. They are not exactly the same. There is probably less than a million firearms difference.

The current political unrest, combined with the Christmas shopping season, is likely to continue the firearms and ammunition buying frenzy.

Most manufacturers are producing firearms as fast as they can to meet the demand in the American market. Ammunition supplies are being purchased as fast as they reach retailer shelves. A major supplier, Vista Outdoor, has a backorder time of over a year for ammunition.

The number of firearm sales in the United States appears limited by manufacturing capacity, as demand outstrips supply.

The United States has been an island of tranquility on a troubled planet for over 70 years. Major military battles have not been fought on the lower 48 states since the Civil war. Even during World War Two (WWII), there was very little fighting on American soil. Almost all of the fighting was limited to overseas territories. Both Alaska and Hawaii were territories during WWII.

Australia suffered hundreds of bombing raids during the war. India lost over a million people to famine. Europe was ravaged by the war, China devastated, Japan conquered, Africa mired in conflicts.

No one knows what the United States may experience in the next decade. The uncertainty is one of the things driving firearm and ammunition sales.