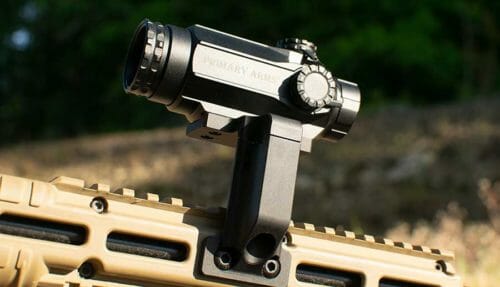 U.S.A. -(AmmoLand.com)- Kel-Tec is a company that makes its money by offering innovative, unique products at an affordable price. A great example of which is the Sub2000. It’s a polymer-framed, semi-automatic carbine that folds in half for easy storage. The gun is incredibly simple, reliable, and lightweight – but it does have one Achillie’s Heel: the gun can’t be folded with an optic mounted on it.

The engineers at Midwest Industries developed a solution for this problem with their MI-G2SUB-T2. This product is a dog-leg M-Lok mount designed for the Aimpoint T2 reflex sight or any optic that uses that mounting interface. For testing, I utilized a Primary Arms Cyclops prismatic sight, and it fit flawlessly.

The mount looks pretty standard at first glance, but a closer look reveals what is so special about it: a pivoting arm. This allows the mount to pivot out of the way for the gun to fold, and then back in to place either when needed, or while totally folded. Allowing for a compact bug-out or hiking gun that doesn’t have to sacrifice the use of an optic for concealability.

But this feature also adds a potential point of failure. With the addition of a rotating component, that’s just one more thing that could fail on the gun. So I decided to test it out over the course of a few hundred rounds to see if it would hold zero. I further exacerbated this by rotating the mount 1,000 times. After which, the mount still locked up fine and only became easier to flip in and out of position.

Thus far, it seems to work 100%. Though, the only gun I’ve had a chance to test it on is the 9mm Glock-magazine version of the Sub2k Gen 2. I would like to try the test again but with a .40 SW version and maybe after 1,000 rounds and 1,000 manipulations you’d see some movement – but I doubt it.  Based on my testing, Midwest Industries Sub2K optics mount is an ingenious solution to a problem some owners of the Kel-Tec carbine were facing. And at just under $100, it’s not a huge investment.

The only other issue I have with the optic mount is the height overbore. In order to be able to facilitate the folding mechanism, the mount places the sight well above the handguard. Given the already high iron sights on the Sub 2000, this isn’t a deal-breaker. And it’s still miles better than the old AK scope mounts, but it does seem a little awkward initially. Though after an hour or so of use, it felt completely natural.

So, is it worth the $100 price tag? If you want to mount an optic on your Kel-Tec Sub 2000 and leave it on when the gun is folded – 100% yes. If that doesn’t interest you in any way, probably not. Though I feel it really elevates the weapon’s effectiveness as a bug-out gun if the shooter can rapidly engage targets at medium and close range.