Inside the Smithsonian Gun Room, aka the National Firearms Collection – VIDEO 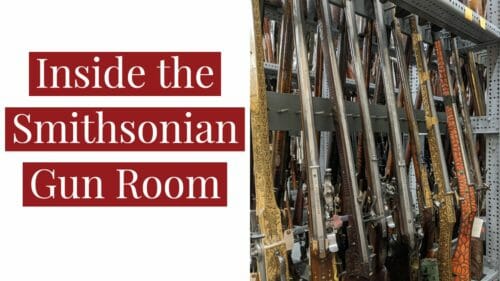 Washington, D.C. –-(AmmoLand.com)- Better known as the Smithsonian’s Gun Room, what is officially known as the National Firearms Collection is an assemblage of more than 7,000 firearms dating back centuries. They tell the story of the United States and its global impact and reach through historically significant arms, patent models, and more.

Some pieces from the collection are on display, but the vast majority are not.

This is the view you’re greeted with upon entering the Gun Room. It gives a brief glimpse into the remarkable collection that awaits.

This first rack includes a couple of miquelet lock muskets given to President Thomas Jefferson in 1805 by the Bey of Tunis after the Tripolitan Wars. The gift influenced the inclusion of the now-iconic lyrics “to the shores of Tripoli” in the Marine’s Hymn. Right next to those is an embellished Jaeger rifle that belonged to empress Catherine the Great of Russia. A velvet cheek piece added to this firearm ensured her comfort while shooting.

Among the numerous racks of guns are ones that have stories, but you have to know what you’re looking for. For example, this percussion double-barrel shotgun was presented to Union Civil War General George Henry Thomas, who was one of the principal commanders in the war’s Western Theater. His shotgun is sitting right next to a beautifully embellished gun made in Versailles, France.

The setup for photography is in a tucked-away little corner, sharing the space with a remarkable collection of swords. There, I photographed a handful of interesting pieces. First up was a LeMat revolver that looks a bit different than the ones you might be used to seeing. That’s because it’s Jean Alexandre LeMat’s patent model for the pinfire variation of the earlier percussion model.

This pair of Dragoon pistols was unique because of their grips, which were silver instead of wood. They were engraved presentation pieces to then-Colonel George Washington Morgan for his “gallantry and high military bearing” during the Mexican-American War in the 1840s.

Then came a rather unassuming Adams revolver. The butt of the gun is engraved, revealing its impressive provenance. The revolver was presented to Private Francis Brownell who shot and killed the man who shot and killed Colonel Ellsworth while he was removing a Confederate flag from atop the Marshall House in Alexandria, Virginia, on May 24, 1861. Brownell was awarded the Medal of Honor for his actions, which is on display in the museum’s galleries. The gun was given to him just 5 days later.

Finally, the highlight of my trip was a piece I wasn’t expecting to find: the original patent model created by John Moses Browning for his single-shot rifle. I opened up one of the gun room’s many storage drawers and there it was, in the middle of a bunch of other patent models with a simple hangtag that read, “John M. Browning Patent Model.”

Of course, there’s never enough time in the day to explore it all, and I had to leave before I was satiated. Oh well, I guess that just means I’ll have to make a return trip – and I’ll be sure to bring you along for that one, too!

The post Inside the Smithsonian Gun Room, aka the National Firearms Collection – VIDEO appeared first on AmmoLand.com.