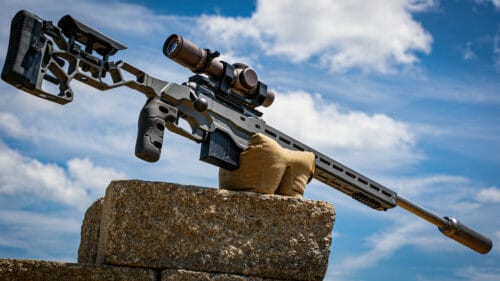 U.S.A. –-(AmmoLand.com)- I really enjoy it when I can bring you guys something that is both an excellent deal, and an exceptional value at the same time. That is exactly what the Savage Elite Precision delivers. I really appreciate getting the most for my hard-earned money, as I’m sure you do as well. Plus, anything good we can salvage from 2020 is an additional bonus. This is one of the most feature-packed Savage 110 actions, nestled in one of the best chassis currently available, the Modular Driven Technologies ACC chassis.

Savage has really pulled out all the stops to deliver one of the most feature-packed 110 actions they’ve offered. Starting at the muzzle, they have a taper aligned, self-timing muzzle brake, which is very well done. However, I replaced mine with the Area 419 Hellfire so I can attach the maverick suppressor. Savage is using their competition profile barrel, with a nitrided barrel nut and nitrided receiver which makes them extremely strong and corrosion-resistant. They also have a blueprinted action, and a titanium nitride finished bolt body, making the action as smooth as possible. The Titanium Nitride also gives the bolt this cool unique gold appearance. The Savage Elite Precision is also equipped with Savage’s Accu Trigger. This trigger is user adjustable from 1.5 pounds to 4 pounds. If you’ve never seen the Accu Trigger before, it has this tang in the middle that has an extremely light initial pull. After that, you pull the actual trigger to break the shot. The Accu Trigger is kind of a love it or hate it thing among shooters; for me, I really don’t mind it at all. I just think of it as a two-stage trigger and don’t give it a second thought. If the Accu Trigger is something that bothers you, an aftermarket replacement can be used to swap it out. I’ve never modified mine; right from the factory mine is pulling at right about 2 pounds and has been working great for me.

The really big deal with the Savage Elite Precision offering is it comes in an MDT ACC chassis. ACC stands for adjustable core competition chassis, and this is simply one of the best thought out, most feature-packed rifle chassis available on the market today. Starting in the back, there is a fully adjustable buttstock capable of any adjustment you could possibly think of, and maybe a few you haven’t. Everything is also marked, so if you have to move things around you should be able to get right back where you want.  Moving forward, there is also a fully adjustable grip with thumb rests on both sides, letting you truly get your trigger finger in the exact position you want. The Elite precision also ships with a 10 round metal AICS magazine from MDT. This is easily the nicest AICS magazine I have ever used, and to add to the value of this package, these mags run about $70 on their own. There’s a barricade stop and the mag well is flared. The handguard is equipped with MLOK on three sides, and it also has an ARCA rail running the full length of the bottom. If you haven’t seen ARCA yet, this system allows you to quickly adjust the placement of various accessories to better balance the rifle on whatever shooting platform you may have it resting on. There are also a ton of accessories available for the MDT ACC Chassis. You can add weights all along the inside bottom of the handguard, you can add MLOK weights, and the buttstock can also take a weight. This allows you to really cut down on recoil and get the rifle balanced just the way you want it. This is basically one of the best chassis currently available, and it is awesome that it is being offered from Savage in a gun direct from the factory.

The Savage Elite precision is offered in several different calibers; everything from 223, all the way up to 338 Lapua Magnum. I wanted to try 6MM Creedmoor mainly because I keep hearing that it is a little flatter than 6.5 Creedmoor, with a little less recoil. Theoretically, giving the shooter the advantage of being able to get more shots on more targets quicker. However, that extra speed does come with one major sacrifice; barrel life. The barrel life for 6mm Creedmoor is extremely short. From what I hear from guys who have changed many barrels in their guns, you’re really only going to get around 1000 rounds out of a barrel. The Savage rifles have a very unique feature that I feel gives them a huge advantage when it comes to short barrel lives and changing barrels. They feature a barrel nut, and if you’re fairly handy with some tools you can change this barrel in your garage yourself and don’t need to send it off to a gunsmith. That is a huge part of the reason I personally wanted a 6mm Creedmoor in a Savage rifle. Now, some custom guns are currently available with Remington actions and Savage style pre-fit barrels, but it is a fairly common feature on the Savage rifles from the factory.

The Savage Elite Precision is an awesome rifle with a ton of great features for an amazing price. My only complaint is the bolt lift is a little heavier than I would like. This is a pretty common criticism of Savage rifles and a small blemish amongst a whole lot for your money in this package. I wouldn’t call it a deal-breaker, but I want to make potential buyers aware if you think it’s something that may bother you. Most people really wouldn’t think of it as an issue, and I will say it does keep getting incrementally better as I get more rounds and use on the gun.

The Savage Elite Precision is an extremely accurate and feature-packed bolt gun that would be perfect for anyone possibly looking at getting into PRS shooting, or someone who just wants a very well equipped rifle to do some long-range plinking. As impressive as everything on the Elite precision is, the most impressive feature is probably its phenomenal value. I don’t think there is another offering from any other company that will give you as much for your money as the elite precision. The MSRP on this rifle is currently $1999, but you can easily find them for just over $1600. Of course, that will vary a little depending on the caliber. That is pretty exceptional when you consider that the MDT ACC Chassis can retail for around $1000 on its own. As a whole package, I’m extremely happy with this rifle, especially with the chambering I have in 6mm Creedmoor. I love everything about the chassis; the Savage is more accurate than I can shoot, easily sub MOA probably closer to 3/4 or 1/2 MOA, and I can easily replace the barrel when it gets shot out.

Unlike many channels out there, we make it a priority to respond to your comments. We enjoy engaging with our followers and will gladly answer any reasonable questions you may have.