Kyle Rittenhouse out on $2 Million Bail in Kenosha, Wisconsin 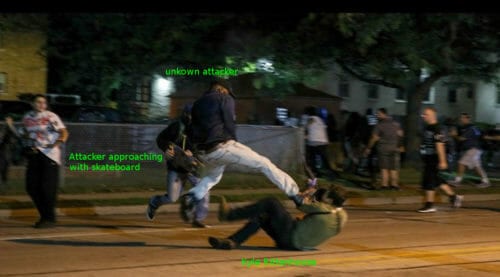 U.S.A. –-(AmmoLand.com)- Kyle Rittenhouse, the young defender of lives and property during the Kenosha riots, who shot three mob members who attacked him as he ran from them, was released on bail from Kenosha County Jail, on Friday, 20 November 2020.

The Kenosha County Court Commissioner, Loren Keating, set bail at $2 million, after Rittenhouse’s attorney, Mark Richards, asked for bail to be set at $750,000.

In Wisconsin, no bail bond system is allowed. Therefore the entire $2 million bail was raised through donations to the #Fightback site. Kyle attempted to turn himself in shortly after the shootings but was told by police to “go home” in the chaos of the riot. From fox23.com:

Rittenhouse appeared in court by video conference for his initial appearance Monday. He was extradited to Wisconsin last week after being held for weeks at a juvenile detention center in Lake County, Illinois.

The 17-year-old turned himself in to police in Antioch, Illinois, one day after the shooting. Records show he tired to surrender to a Kenosha police officer earlier, hours after the shooting, however, he was told to go home.

Kyle Supporters across the country have been outraged by what is considered a political prosecution, in spite of ample video evidence of self-defense. Included is a charge of “Possession of a Dangerous Weapon by a Person Under 18”. The charge does not even apply to Kyle, because it does not apply to people over 16, except in special circumstances, which were not germane to Kyle.

The persecution of Rittenhouse has become a popular cause on the Left, with unfounded charges of “White Supremacy”.  They claim Kyle provoked the attack by being armed. An example of the irrational argument comes from bloomberg.com:

The trouble begins when you start applying the legal rules to someone in Rittenhouse’s situation, namely, someone who has carried an AR-15-style weapon to what is intended to be a peaceful protest. In a commonsense universe, this act itself would appear to be a provocation.

Yet under Wisconsin law, adults are entitled to carry around their licensed firearms in public places. An open-carry law means that prosecutors would have a tough time convincing a jury that simply carrying an assault rifle counts as a provocation.

People on the Left claim a black person who did the same as Kyle would not be alive, or would not be given bail. But the facts show otherwise. Kyle’s attackers have not been charged. The one clear attacker who seems to have escaped unharmed is black and has not been identified, although there is enormous video evidence with clues that could be used to identify him.

Justice should be blind, not based on skin color.

If someone chases a person and tries to violently take their rifle, the rifle carrier is not obligated to wrestle for the firearm.  The rifle possessor can shoot the attacker to prevent them from taking the rifle and using it against them. From powersfirearmstraining.com:

As noted above, if the client used a deadly weapon, especially a firearm, to defend himself against an unarmed attack, the attorney will have a difficult time convincing the jury that the client acted in self-defense.

If the client is armed with a firearm, and the aggressor is aware of the firearm and tries to close in on the client, the client is justified in firing before the parties begin wrestling over the firearm. Many police officers are killed with their own firearms.27 Officers are trained in specific retention techniques to avoid having their service firearms taken away and used against them; a client will rarely have the benefit of this training. Police react to an effort to grab an officer’s handgun as an attempt to kill the officer with that handgun; the client should be able to do so too.

Police use-of-force doctrine also allows officers to shoot unarmed aggressors running towards them. As the U.S. Court of Appeals for the Third Circuit noted: “A reasonable officer would not be expected to take the risk of being assaulted by a fleeing man who was so close that he could grapple with him and seize the gun. Our recitation of these events is a discussion in slow motion of an incident that took place in a matter of seconds.[The officer] had no time for the calm, thoughtful deliberation typical of an academic setting.”28 Similar logic should apply to citizens as well.

There are many examples in the law. Someone who violently tries to illegally disarm you is considered a deadly threat by the justice system.

Those who have rallied to Kyle’s defense believe they are working against a corrupted political system.

Can anyone reasonably believe if Kyle were black, any charges would be brought against him?

Yes. Charges would be brought. It is not Kyle’s skin color that is deemed most important. Rather, he dared to assert his rights to be armed and to defend self and property against a Leftist mob. Justice Clarence Thomas is not considered to be “authentically black” by the Left.

Those who stand for Kyle and the rule of law have been vilified by the left.  Actor Ricky Schroder has already been threatened.

The post Kyle Rittenhouse out on $2 Million Bail in Kenosha, Wisconsin appeared first on AmmoLand.com.