2 Oregon Counties Adopt ‘2A Sanctuary’ Measures; Will They Stand? 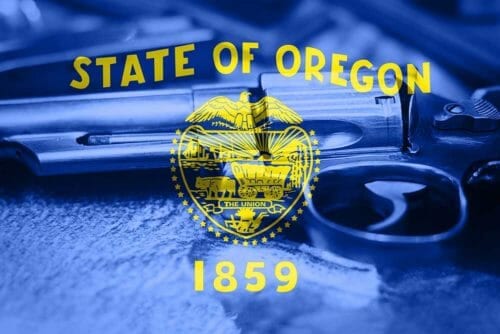 U.S.A. –-(AmmoLand.com)- A new political gun battle is shaping up in two Oregon counties after they adopted ballot measures earlier this month that prohibit enforcement of gun laws, another signal that Second Amendment activism is alive in the Pacific Northwest.

According to KGW News, four counties had similar ballot measures up for approval Nov. 3, and two of them were adopted, in Columbia County northwest of ultra-liberal Portland along the south banks of the Columbia River, and in Umatilla County in far more conservative Northeast Oregon. Unofficial election results show Columbia County voters barely approved their measure 50.78 percent to 49.22 percent, while voters in Umatilla County were more decidedly in favor with a 62 percent majority.

Civil unrest and rioting over the past several months in Portland may have had a significant impact on the measures. The Oregon Firearms Federation ran a statement in the Columbia County voter’s pamphlet that said in part:

“Year after year, politicians in Salem and extremists in Portland work overtime to enact new laws and rules to restrict your 2nd Amendment rights or make self-defense firearms useless, if available at all.

“Measure 5-278 protects Columbia County residents from the ever-expanding reach of big city radicals who are promoting violence and supporting unchecked criminal behavior while demanding that you be helpless when your town or home is targeted.

“This year send a message to the militants that their out-of-state money can’t buy your silence or intimidate you.

“Measure 5-278 is a simple, common-sense measure to guarantee that you and your family do not become the latest victims of the senseless violence Oregon’s elected officials are promoting.”

The message evidently hit a nerve. There was no similar statement in the Umatilla County voter’s guide.

But there may be a problem and it is the Beaver State’s gun law preemption statute. According to KGW, “Experts say that the SASO ordinances may conflict with a state statute, ORS 166.170, which explicitly gives the Oregon Legislature authority to regulate firearms in the state. It also voids any “county, city or other municipal” ordinance that seeks to regulate or restrict firearms and ammunition.”

Proponents argue that’s not the case at all, because they only address the enforcement of firearms laws, not the actual statutes. Still, opponents predict there will be lawsuits, and when the East Oregonian newspaper based in Pendleton recommended a “No” vote on the measure, it argued, “This is likely to be found unconstitutional.”

The same editorial argued, “We live in a country that leads the world in gun ownership and gun deaths, where mass shootings are not unusual events, where more than 300 people are shot by a gun each day, and where our citizens are killed by guns 25 times more often than the citizens of other wealthy countries.

“We don’t believe that laws requiring universal background checks prior to gun purchases, safe gun storage or “red flag laws” (temporarily preventing a person in crisis from accessing a gun) infringe on the rights outlined in the Second Amendment of the U.S. Constitution.”—East Oregonian, Pendleton, Oct. 6, 2020

No citizen is killed “by a gun,” and no people are “shot by a gun.” They are shot, and killed, by people using guns to be sure, but this appears to have been yet another example of a news agency transferring guilt from the perpetrator of a crime to the instrument used in the crime. In the case of Umatilla County, where Pendleton is located, this may have been another situation where the local press is out of touch with the sentiments of its readers because they lined up pretty strongly in support of Measure 30-145.

It appears gun ownership is becoming serious business, across the state and especially Columbia County, according to data reported by KGW. State firearms checks increased 49 percent between Jan. 1 and Sept. 30 of this year, over the same period in 2019. In Columbia County, background checks spiked a stunning 88 percent, which appears to have set off alarms at Ceasefire Oregon, a gun prohibition lobbying group. They reportedly worry that the sanctuary ordinance could result in more firearms-related death and crimes involving guns. But that is a perennial argument put forth by anti-gunners when they are battling any pro-rights regulation.

There is no small amount of irony in the adoption of these sanctuary measures. According to the Portland Oregonian, “Legal experts…say the resolutions are on shaky ground because they require police to ignore laws they’ve taken an oath to uphold. The measures also appear to undermine the state’s legal authority to regulate guns. Under Oregon law, the power to regulate almost all aspects of firearms rests with the Legislature.”

But the same logic seems to elude the political left when it comes to adopting so-called “sanctuary” measures that prohibit local police from checking the legal status of people they encounter during criminal investigations. The difference is that a “2A Sanctuary” measure is supposed to protect a constitutionally enumerated fundamental right, while the “sanctuary” restrictions on police arguably prevent them from determining whether someone is in this country illegally.

Like neighboring Washington, Oregon has become a hotbed of anti-gun politics with Democrats controlling the legislature in Salem and a far-left governor apparently willing to sign any gun control measure that hits her desk.

Whether these local ordinances stand or fall, they serve as a signal that at the grassroots level, gun owners are fed up with gun control laws that promise but don’t deliver and invariably affect the wrong people. They are reminding anyone willing to pay attention that “We’ve tried your way and it didn’t work. We’ve been demonized and penalized for crimes we didn’t commit. It’s time to try a different way, and in the meantime, leave us alone.”

The post 2 Oregon Counties Adopt ‘2A Sanctuary’ Measures; Will They Stand? appeared first on AmmoLand.com.