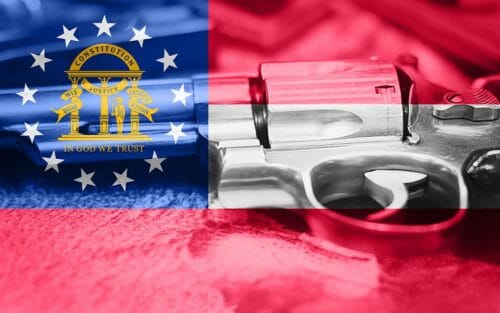 ATLANTA, GA –-(Ammoland.com)-The battle for the soul of our country runs through Georgia. We must assure Republicans maintain control of the Senate by making sure David Perdue and Kelly Loeffler wins their runoff elections against their anti-gun opponents.

Trump has not conceded the election, and legal challenges persist. No matter our feelings about this past election’s legitimacy, we must prepare for the most anti-gun presidential administration in our country’s history. If Trump pulls out the win, I will celebrate, but I am a realist, and I know it is a long shot. In all honesty, Trump doesn’t have the support of the Washington elite, mainstream media, or the Republican party, and that makes the battle hard to win.

So what does that mean for our beloved Second Amendment?

Let’s start with the Biden gun policy. Biden wants to ban the sale of so-called “assault weapons” and magazines that hold more than ten rounds. He would ban the most popular rifle in the United States. He does have a grandfather clause, but it would require all citizens to register every modern sporting rifle and magazine as NFA items.

It would require citizens to pay $200 per item. I have a sizable collection of AR15s, AKMs, and various other rifles and pistols that fall under this category. I also own an uncountable number of magazines that are capable of holding more than ten rounds. In my case, I would have three choices. One, I could pay hundreds of thousands of dollars for the privilege of exercising my God-given rights. Two, I could turn all my previously legal items over to the government for a fraction of their value. Three, I could resist tyranny and put myself at risk of being prosecuted.

Biden also wants to ban the online sale of guns, gun parts, and ammunition. That would put companies like Palmetto State Armory, Brownells, Midway, and many others out of business overnight. The cost of parts would skyrocket. The new laws would crush the firearms industry.

Kamala Harris doesn’t believe in the individual right to own a firearm. For the fact-checkers on Facebook, this statement isn’t conjecture or my opinion. Her stance on the personal right to own a gun was stated publicly in an amicus brief that she signed and co-authored in the Heller Supreme Court decision. Harris believes that only a government-sanctioned militia has the right to bear arms. If something happens to Biden, then Harris would be President.

If the Democrats control the Senate, they will push their anti-gun agenda to the President’s desk. Chuck Schumer will be in charge of the Senate. In the Senate, we have a safeguard from the party in charge ramming through anything they want and making the minority party obsolete. That safeguard is the legislative Filibuster.

A lot of people don’t know that the Senate leader can get rid of the Filibuster with a simple rule change. Schumer has already stated that he would be open to killing the Filibuster. If Schumer does kill the Filibuster, then all the anti-gun legislation would be passed by Congress, and Biden would sign them into law.

Scarier than the anti-gun legislation is the Democrat’s promise to pack the court. Court-packing would be expanding the Supreme Court from nine Justices to 13 or more, giving the anti-gun judges control of the court. Schumer would kill our only legal recourse against unconstitutional laws. He said Republicans would regret confirming Amy Coney Barrett, and I take him at his word.

Even if the Democrats do not pack the court and SCOTUS decides to hear a gun law challenge (The courts scarcely hear gun cases), it will take years before a case gets to the high court. It would be impossible for gun companies to survive while waiting for legal challenges. If the court rules in gun owners favor (no guarantee), who will want to start a company in a hostile environment?

When Governor Brian Kemp appointed Kelly Loeffler to the Senate, I was worried. I wasn’t sure if she was pro-gun enough for my liking. To my surprise, she has been everything I hoped. She has pushed back against every anti-gun bill that Democrats have introduced in the Senate. She has also pushed back against things like red flag laws. Loeffler has co-sponsored bills for national reciprocity, removing of suppressors from the NFA, and restoring veteran’s gun rights. She has championed the Second Amendment, and groups like Gun Owners of America and the NRA have endorsed her.

Her opponent, Raphael Warnock, is anti-gun. He has actively campaigned against guns even in his church, where he gave anti-gun sermons. Warnock has taken money from Bloomberg backed front groups, including Everytown for Gun Safety. In addition to Everytown, groups like Brady Organization and Giffords have endorsed him.

In the other Senate Race, David Perdue is running as the pro-gun candidate, vowing to resist any new guns. Although Perdue isn’t as strong on the Second Amendment as Loeffler, he is still worlds better on the issue than his opponent Jon Ossoff, who has accepted the endorsement of Everytown, Brady, and Giffords.

Groups on both sides of the issues have descended on Georgia to fight for their chosen candidates.

Giffords, Everytown, Moms Demand Action, and non-gun groups like NARAL and Planned Parenthood are spending millions to flip the Senate and change the Republic forever. Pro-liberty groups like GOA, NRA, FPC, and SAF are working on the ground with local gun groups like Georgia Carry. GOA has even relocated staff to help out during the Georgia runoff election. I will even be making the trip down to Georgia myself to save our gun rights.

Gun owners in Georgia can join the fight by volunteering with any of the campaigns. The pro-gun side needs people that are willing to door knock and educate the general public on what is at stake in this election. Gun owners that can’t make the trip can still volunteer to make phone calls and send text messages to remind pro-gun voters to vote on January 5th. Out of state Americans are also allowed to donate to both Loeffler and Perdue.

We are in trying times. The election on January 5th in Georgia will have national implications that will affect us all. It is time for all gun owners to take action to defend the Republic.