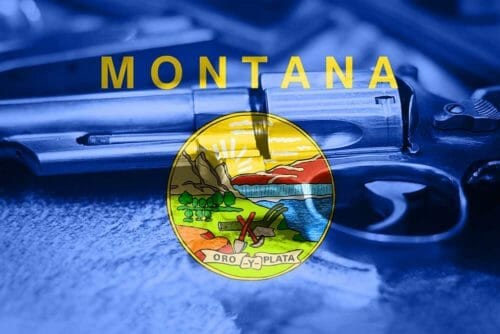 U.S.A. –-(AmmoLand.com)- Montana is on track to become the 17th state to restore Constitutional Carry. It will probably do so in 2021. Constitutional Carry means most people can carry, concealed or openly, most of the time in most public places, without any special governmental permission or permit. It was the state of affairs in the young United States when the Bill of Rights was ratified in 1791.

In 2020, Republican Greg Gianforte won the race for Governor in Montana. Greg is the first Montanan Republican governor since 2005.

The former governor, Democrat Steve Bullock, was defeated in his attempt to win a Senate seat in Montana, with 53% to 47% of the vote.

President Donald Trump received 56.9% of the vote to Candidate Biden’s 40.6% of the vote.

As a lifelong gun owner and as Montana’s former top cop, Steve Bullock is a staunch supporter of our Second Amendment rights and fights for the right of all law-abiding citizens to own and responsibly use guns.

No right to carry guns or mention of the right to self-defense was included.

According to uncertified vote counts from the Montana Secretary of State’s office, Republicans picked up nine legislative seats in the Montana House and one in the Montana Senate — enough to expand their majorities to 67 of 100 House seats and 31 of 50 Senate seats. Going into the 2021 session, the Republican majority in the House will be sufficient to override a governor’s veto or to pass measures that require a two-thirds majority without winning Democratic votes.

It is hard to see a reason for the Montana legislature to fail in a fourth attempt to pass Constitutional Carry, this time in 2021.

I talked with Gary Marbut, the powerhouse in Montana on issues impacting the right to keep and bear arms. Gary has arguably been the most influential Montana citizen on these issues since 1987. He founded the Montana Shooting Sports Association. (MSSA) when the local NRA affiliate seemed unwilling to make waves.

He and the MSSA have been responsible for the passage of  68 pro-gun and pro-hunting bills passed in Montana.

The flagship bill Gary and the MSSA intends to introduce in 2021 will focus on eliminating gun-free zones. It will also remove carry restrictions.

I asked Gary what the chances of passing the flagship bill with permitless carry. He said:

“Excellent. We’ve gotten permitless carry through the legislature three times. We have a new governor who is a gun guy.”

Montana is on track to become the 17th Constitutional Carry state in 2021.

It happens, over a third of the states in the Union will have Constitutional Carry, or permitless carry, if you prefer.

Other states which have a favorable climate for Constitutional Carry in 2021 are Alabama, Indiana, Iowa, Louisiana, and Tennessee.

The Covid 19 lockdowns appear to have slowed legislative activity in 2020.