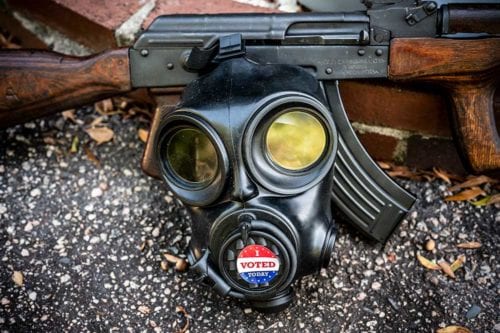 U.S.A. – -(Ammoland.com)- “For years the Dems have been preaching how unsafe and rigged our elections have been,” President Donald Trump tweeted Friday. “Now they are saying what a wonderful job the Trump Administration did in making 2020 the most secure election ever. Actually this is true, except for what the Democrats did. Rigged Election!”

For years the Dems have been preaching how unsafe and rigged our elections have been. Now they are saying what a wonderful job the Trump Administration did in making 2020 the most secure election ever. Actually this is true, except for what the Democrats did. Rigged Election!

“This claim about election fraud is disputed,” Twitter moderators claimed, linking to what a reasonable person would expect would be proof of falsehood. Instead, what they gave us was a general claim that “experts” say “Voter fraud of any kind is exceedingly rare,” crediting that insight to The Associated Press and Reuters.

Left intentionally unaddressed were the specifics report after report of “voting irregularities,” making the knee-jerk Twitter designation not only a logical fallacy but a deception designed to make readers discount concerns and instead embrace the all-pervasive, media-parroted narrative that such concerns are “baseless.”

Perhaps some are (I’ve speculated myself that some rumors may be started to discredit everything those who fall for them say), and perhaps some aren’t.  But you don’t get to just dismiss serious allegations bolstered by evidence and testimony by saying you disagree. At least “progressives” don’t seem to think you should when they presume guilt and ruin lives with hashtags like “#BelieveWomen” (unless the person being accused is Joe Biden).

Picking AP and Reuters as the arbiters of credibility and trust is a stretch of its own. You can see for yourself that AP made a factually incorrect assertion about the election that was presented as straight news, yet you won’t see a Twitter dispute warning on its White House reporter’s tweet. The fact that both “news services” present any number of instances where gun owners could point out glaring lies of omission and outright propaganda presented as “news” shows the last thing we can expect is for them to act as honest brokers.

This is the reason I began referring to what I initially called Authorized Journalists as Fourth Estate Fifth Columnists and, of late, the DSM (Duranty/Streicher Media).

Besides, to paraphrase Bill Clinton committing perjury, “It depends upon what the meaning of the term ‘exceedingly rare’ is.” So what if it’s rare? Granted millions voted and most followed the rules. That doesn’t mean fraud didn’t happen. All you need are a few instances by a handful of the right people to make a huge difference in election results.

Do you know what else is “exceedingly rare”? Murders with so-called “assault weapons.”

“In 2012, only 322 people were murdered with any kind of rifle, F.B.I. data shows,” an exceedingly rare, honest analysis in The New York Times, of all places, revealed. How many of those fit the inconsistent definitions of “assault weapon” used by various states and gun-grabbing interests are unknown because such statistics are not known, but the obvious answer is a fraction of the 322, out of thousands of homicides.

Yet when you see a media outlet or a gun control group tweeting out their latest press release masked as news hysterically demanding semiautomatics and standard capacity magazines be banned and confiscated because they’re “weapons of war,” you see no “This claim is disputed” warning.  Ditto for when prohibitionists present themselves as promoting “commonsense gun safety.” Or over fake studies about “gun owners” that conflate them with criminal gun possessors or lie about “developed countries” by leaving out ones that don’t support the script.

That Twitter controls the conversation, so that “disputes” are one-sided and work against non-“progressive” messaging is, unfortunately, to be expected. Co-founder Jack Dorsey made no secret of his personal and corporate hospitality years back when, in his capacity as CEO of the Square payment processor, he changed the seller’s agreement to forbid “payments in connection with … sales of (i) firearms, firearm parts or hardware, and ammunition; or (ii) weapons and other devices designed to cause physical injury.”

Twitter, the DSM, and the Democrats have an agenda and they’re not going to let anything get in their way. That’s one thing no one who believes in truth over everything else could possibly dispute.