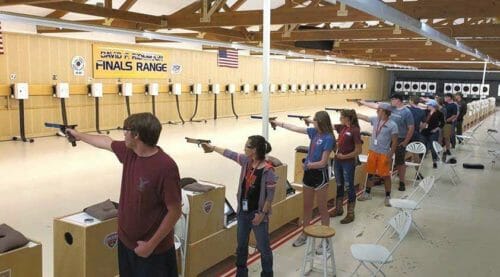 U.S.A. -(AmmoLand.com)- The Scholastic Action Shooting Program (SASP) has been named the National Governing Body for NCAA Pistol by the NCAA pistol coaches.

As the governing body, the SASP will facilitate the NCAA Pistol Championships being held March 24-27 at Fort Benning, GA. According to the National Rifle Association (NRA), college air gun competitions are practiced by over 300 collegiate teams across the nation.  The NRA will be lending expertise and contributing as the main partner of this program.  With SASP’s recent announcement of adding international air disciplines to their program, NCAA shooting programs will directly benefit from the addition of new youth SASP international athletes looking to continue their shooting career in college.

“We are thrilled to become the governing body of NCAA Pistol Shooting Sports,” said Rick Leach, SASP National Director. “With our recent addition of air disciplines, and as the youth feeder program for USA Shooting (USAS), we are building a path for athletes to move from grade school to college and then on to the Olympics. We look forward to working with the NRA, Civilian Marksmanship Program, USAS and other national shooting programs to grow youth shooting sports in the nation.”

The Scholastic Shooting Sports Foundation (SSSF) is 501(c)(3) public charity responsible for all aspects of the Scholastic Clay Target Program (SCTP) and Scholastic Action Shooting Program (SASP) across the United States. SCTP and SASP are youth development programs in which adult coaches and other volunteers use shooting sports to teach and to demonstrate sportsmanship, responsibility, honesty, ethics, integrity, teamwork, and other positive life skills. SCTP was developed as a program of the National Shooting Sports Foundation (NSSF) until the SSSF was created in 2007 to operate the SCTP. In 2012, SSSF created the SASP and became the managing foundation of both programs.