How “Safe” Are You? The House of Cards That is Gun Free Zones 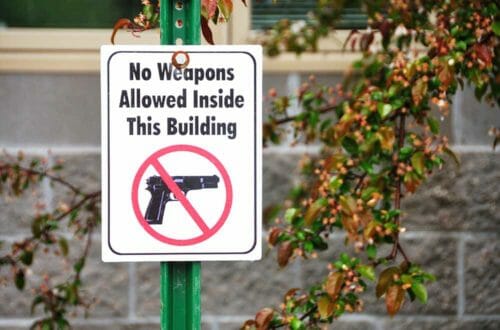 U.S.A. –-(AmmoLand.com)- You know… Over the last few months, as we’re all returning to school, I’ve noticed the word “Safe” being brandished about in nearly every facet of our culture. Here are a few that came in just this morning:

“In the meantime, take care of your families and stay safe.”

And that is just the start. For the thinkers among us, I offer you a question. Are you ever truly safe?

For the thinkers among us, I offer you the reasoning why we’re not, have never been, and will never be. Sin stalks us and wishes to have us. Period. Calamity is just around the corner. Now, that doesn’t mean we lose our minds and become paranoid obsessives. But, it should mean that we prepare for possible problems. If we didn’t, you’d neither need a spare tire nor a fire extinguisher. To prepare adequately is a physical and mental exercise equally.

I’m primarily interested in truth. And the truth is, each time some well-intentioned person tells you that you’re safe, you aren’t. They of course want you to be, and they wish for it. I’m glad for that. But ultimately, they have little power over your safety. So, the outcome of ‘safety’ falls squarely on us all as individuals first, and in the communal sense second.

Once we abandon the idea that we’re safe, we can begin to understand the measures, thoughts, and preventative steps necessary to better prepare for problems. This naturally leads to the outcome others call “safety” in the traditional sense.

Their version of “safe” is almost always a house of cards. Their version of “safe” revolves around incoherent ideas and applications. A prime example is the “Gun Free Zone” as it were. Does a sticker or the declaration in law magically make you safer? No. It does not. But do the masses too often believe that it does? Yes. And by the practice of believing a thing like that to be true which isn’t, what can you and I say about that assertion? First, it is incoherent. Second, the net safety of a “Gun Free Zone” drops, not elevates. Why? Because they let their guard down where they’re “safe” right? Thus, they’re less aware situationally and aren’t implementing proper levels of risk assessment.

My point is a simple one today. Each time you hear somebody blathering on about “safe” this or “safe” that, you should seriously be questioning all of it.

I truly believe most folks do wish for other’s safety. However, the sophomoric idea that yapping about safety achieves the goal is the core problem. …And the more they yap the more we accept the word “safe” as legitimate and real.

Michael is a Christian husband and father to two children. He owns and operates Controlled Chaos Arms, a premier custom weapons shop in the Midwest. He serves as Chairman of the board of Directors at the Iowa Firearms Coalition. The pursuit of truth drives him in research and his writing.

Michael enjoys shooting, hunting, and fishing throughout the Midwest and Rockies. An avid outdoorsman and tireless supporter of all Second Amendment virtues, he can be found in his gun shop, in a tree stand with his kids, or on Capitol Hill lobbying in support of Freedom and Liberty at any given time.

The post How “Safe” Are You? The House of Cards That is Gun Free Zones appeared first on AmmoLand.com.