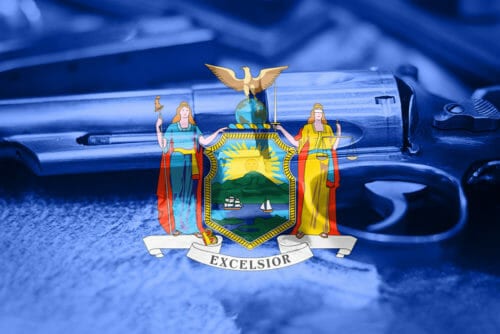 U.S.A. -(AmmoLand.com)- As the joke goes, the only profession with a lower approval rating than Congress is being a lawyer. A new report from the New York State Bar Association shows why that humor has legs.

The NYSBA’s report executive summary begins, “The legal profession has a responsibility to use its legal expertise to promote changes in the law that promote the public good…and NYSBA believes lawyers have a special role to play in addressing gun violence in America to protect the rule of law and the federal and state constitutions.” (emphasis added). Never mind that “protecting the rule of law” as established by policymakers duly elected by voters and lobbying and pushing for changing the law are fundamentally polar opposite approaches to the law.

NYSBA President Scott M. Karson set the table for his group’s report, explaining recommendations made are a guide for New York lawmakers to follow and the state’s bar association has a special role to play by leading state legislators – and other states – to enact the laws they want.

A sober examination would show the state’s gun control laws are failing. Violent crime spiked by 76 percent even as Democratic Mayor Bill de Blasio slashed $1 billion in police funds in a city and state with among the strictest gun laws already. In the rest of the country, crime is falling. The FBI report shows crime continues to decline even as gun ownership grows to record highs.

The NYSBA’s grab bag of gun control items includes banning modern sporting rifles and any magazine capable of holding more than 10 rounds of ammunition. They’re likely aware that New York Democratic Gov. Andrew Cuomo already swung and missed on a standard capacity magazine ban as part of his 2013 NY SAFE Act midnight overreach. Even then, Gov. Cuomo was rebuffed twice on the magazine limit, first by a federal judge in New York and then again by the U.S. Court of Appeals for the Second Circuit.

Additional recommendations include criminalizing private firearm transfers, enacting unenforceable and unconstitutional firearm storage mandates, imposing poorly drafted “red flag” laws that deny Due Process and Second Amendment rights, requiring a state license and mandatory registration to own a firearm, and banning hobbyists and gunsmiths from practicing their trade. They might as well have printed a political brochure from Michael Bloomberg’s Everytown for Gun Safety. It would’ve saved time and money.

Congressional election results show America once again rejected these gun control overtures.  Former failed presidential candidate and billionaire Michael Bloomberg spent over $1 billion to buy more seats for gun control but was rejected. Gun control groups spending millions on gun-control platforms removed “gun control” messaging from their television ads because they know voters are turned off by the message. In New York, antigun Democrats were rejected and the state Senate was denied the supermajority needed to impose gun control even stricter than what Gov. Cuomo previously attempted.

The New York State Bar Association would’ve done well to recognize what policies would actually impact and reduce criminal gun violence in the Empire State. They could have consulted the industry for our input. We would’ve been happy to educate them about Real Solutions for Safer Communities. Unfortunately, they didn’t and will remain the butt of the joke.