Mounting a Trijicon RMR on a GLOCK 19 Slide from Brownells 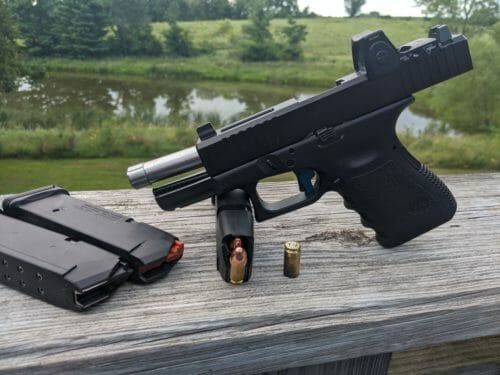 U.S.A. –-(AmmoLand.com)- I pitched the idea of building up a G19 from parts to my AmmoLand editors and they dug it.  I worked with Brownells to grab a shortlist of goods that the average person could assemble with a high degree of success.  Included in that configuration was an RMR and accompanying slide.  My problem?  While I have milled and mounted tremendous numbers of red dots onto pistols in my custom shop, I haven’t been in the habit of carrying or using one routinely.  I didn’t think this would be a problem for me.  Some people complain about the transition from irons to something like the Trijicon RMR, but why would that impact a guy like me?  I work on this stuff for a living.  I would have no problem, right?  Wrong…

I never anticipated a second article stemming from the first article I wrote.  But as it turns out, I needed some help with my transition.  There are really common problems an RMR can help overcome.  For anyone with below-average eyesight or who is growing older, it will eventually become clear to you that focusing on your front sight, the target, and trapping that same front sight amid the posts of a rear sight, all at the same time, becomes increasingly harder with time and age.  The ability to concentrate on your target and lay a red dot atop your point of intended impact makes this very simple and concise.  This method overcomes many obstacles we can’t otherwise avoid in life.  I remember after I did some pretty extensive work on my buddy Capt Dave Funk’s G20, he came back from a series of shoots and hunts to say, “This turned a seeing competition into a shooting competition again.  I love it.”  I thought about that sentiment for a long time.  I think he may have been righter than he even knew.  And this came at a time when nobody was cutting red dot sights into slides.  I wished I’d pushed that service and idea more back in the day.  We do plenty of that kind of work now, but would have, could have, should have, right?

The slide from Brownells I chose for my earlier article came in a kit with the RMR.  With this particular slide the RMR is mounted very low.  I like this.  The earliest versions of this work in the industry were often found as an RMR or the likes bolted on top of a slide – no joke, a guy had literally drilled and threaded two holes to attach an RMR to the top of his flat-top Glock slide and off he went…  I remembered remarking about the “flat screen TV glued to your slide” to the gentleman who took that same pistol to the range and looked much like Rico Suave as the two tiny screws snapped off and his RMR went flying across the range.  We’ve come a long way since then.  There are recoil pillars you can implement when relieving a slide and standpipes for extra thread as well with some models.  The further you can sink an optic down into a slide, within reason of course, the better off you probably are.  My thinking is simple – you’ve worked for years to look just above the slide for a sight, so don’t raise that up a great deal higher than you need.  This assumes nobody has gone too far by mounting a unit too low.  Occasionally mounting screws can interfere with the normal function of the slide components, so avoid that.

The caveat here is the sights.  Some people take them off.  I opted for tall ‘suppressor’ sights as a backup in case the red dot stopped for some reason.  Here’s the rub.  The lower down you slam your optic, the higher the sights appear in the viewing area of your optic.  My hope was to have just barely enough sight procurement in the bottom of the viewing area to use them in emergencies, but also have a ton of unobstructed view through the RMR window.  My particular choice in sights stick up a tad, so I might chuck them up later in the mill and shave them off a bit.  For now, they work OK, but time will tell if I leave them as is.

I have to be honest.  I anticipated having a tiny bit of trouble transitioning away from iron sights to the RMR.  I’ve been a ‘front sight’ guy forever.  I handle and test shoot dozens of handguns a week in my custom shop, so it has become a universal precept for me to “get on that front sight” immediately.  This led me to choose dull black iron sights.  I didn’t want shiny, tritium, or otherwise distracting sights to pull me away from the red dot.  I’m glad I did this too.  As it turned out, I needed all the help I could get.  I simply WAS NOT good at picking up the red dot.

I was having trouble consistently getting the dot, period.  I was talking with Rick Largesse from SSV Concepts, and he told me to basically quit overthinking it.  “Just punch out to get on your front sight, and that dot will be there.  Don’t think about the dot or search for it.  Concentrate on your natural point of aim that brings you into alignment with the same front site you’ve always used, and that dot will be there.  I promise.”  This helped me a lot.  I did what I always had – punched out and went to acquire my front site, and bang, there it was.

No doubt you all have one of those friends that a portion of your relationship is based steeply with put-downs, tomfoolery, practical jokes, and things you do to one another that you giggle.  I have that friend, and his name is Rick.  This is why it pained me somewhat to acknowledge it, but he was completely right and I was grateful for the tip on my RMR dot acquisition.  The minute I did something as simple as stop searching for that little red dot, it showed up for me. I could then transition into concentrating almost solely on the target.  I am becoming faster and more confident little by little.  I can see why people dig these.  Why do you suppose I resisted this for so long?

I would sum up my tips for you like this…  Consider choosing sights that are out of the way.  You’re buying a red dot to utilize 99% of the time.  So, set it up that way.  The minute that red dot is gone, fails, or is turned off, you’re likely to have no problem picking up those small sights in the bottom of the viewing window.  When I turned off my RMR to simulate that scenario, it was old hat.  I can see how some would want tritium sights, but for me, I was glad to use blacked out sights and still feel that way.  Your mileage may vary, but be honest with yourself.  You’re transitioning into something you haven’t done before so make it simple.  Once you have the learning curve long behind you, put a set of tritium sights on your slide and see if they pose a net gain to your rig or if you can do without them.  Punch out like you normally do and that dot will be there.  Don’t buy a piece of junk.  If your red dot costs less than a hard night of drinking at the Ditch Goat Cantina, you’re being a cheap ass and you’ll regret it.  And as always, please don’t be afraid to take instruction from qualified instructors.  Some money spent on a good class will take you farther than you can possibly imagine.

I wish you the best on your new red dot.  I made some assumptions at the beginning that didn’t hold true.  Yet, I’m glad for the outcome.  I chose quality goods and leaned on my supports when I knew I was over my head.  Duplicate this for yourself and you’ll likely enjoy success.  I enjoy shooting this rig now and I’m still improving.  My performance is better now in terms of accuracy and a touch better in terms of speed.  I believe I can easily improve both.  I’m not sure I could have achieved this kind of result without the embrace of this technology.  I like it.  Hopefully, you will too.

Michael is a Christian husband and father to two children. He owns and operates Controlled Chaos Arms, a premier custom weapons shop in the Midwest. He serves as Chairman of the board of Directors at the Iowa Firearms Coalition. The pursuit of truth drives him in research and his writing.

Michael enjoys shooting, hunting, and fishing throughout the Midwest and Rockies. An avid outdoorsman and tireless supporter of all Second Amendment virtues, he can be found in his gun shop, in a tree stand with his kids, or on Capitol Hill lobbying in support of Freedom and Liberty at any given time.

The post Mounting a Trijicon RMR on a GLOCK 19 Slide from Brownells appeared first on AmmoLand.com.