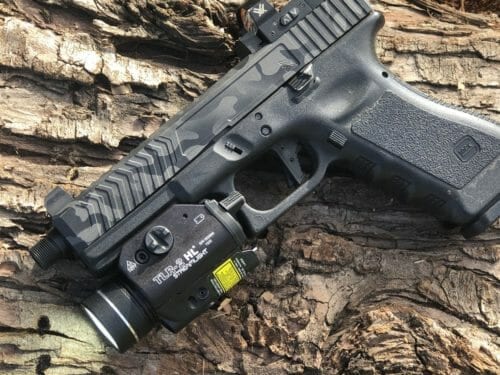 U.S.A. –-(AmmoLand.com)- Streamlight is a company that quietly puts out class-leading products, without much fanfare.  While other light companies have a massive advertising budget (and lucrative military contracts) to highlight their state-of-the-art 2014 technology, Streamlight just keeps rolling out improvements to their lineup.  Such is the condition of the Streamlight TLR-2 HL light/laser combo, which has seen a significant power boost since last I saw it.

Let’s run down the Tech Specs and Features provided by Streamlight before we get into use and abuse.

Out of the box impressions:  Sturdy, light, and bright.

This isn’t a plastic housing for a cheap bulb.  This is an aluminum enclosure, solid and strong.  The battery compartment is rubber o-ring sealed, and the battery housing cap has a lever lock that ensures significant pressure between the housing and cap to seal from intrusion.  This is where the TLR-2’s IPX4 water-resistance rating comes from.  As we’ll see further down, the TLR-2 HL actually exceeds the IPX4 rating.

The TLR-2 HL is 4.88 ounces (with batteries), which is a great spot to be for an extremely high-performance light.  There’s no free lunch, so you’ll notice the extra ~5 ounces on the end of a handgun, but on a rifle it’s nearly negligible.  The force multiplier (and utility of target ID after dark) is well worth the weight, small as it is.

One thousand.  There’s not much that follows “one thousand” that seems small.  When we’re talking lumens, we’re talking about an amount capable of seriously disorienting humans at night, especially on “strobe” mode.  This is an impressive number for me, since the last time I checked out a TLR-2 They were getting around 650 lumens.  The insanely bright light can overpower the red laser a little, but it is still visible.

Mounting is easy, and as advertised by Streamlight, completed without needing to put your hand forward of the muzzle at any time.  A small “button” of the left side releases or engages the rail clamp.  It can be screwed in or out to adjust tension, or lock it down entirely.  Simple and effective, just how I like ’em.

While testing during daylight hours, the TLR-2 HL left me with such bright spots in the center of my vision for a full minute afterward. It was bad enough that I couldn’t pick up my camera without groping around to find it.  During… daylight.  At night, 1,000 lumens is enough to force someone out of the fight.  There’s really not much you can do when you’re “dazzled” and your eyes refuse to function.  While my combat experience never left me as the one on the wrong side of a spotlight during a fight, I’ve seen the immediate panic set in when a combatant turns into a blind, armed, and instantly unwilling participant.  The TLR-2 HL far exceeds the brightness of anything I’ve used before, and the strobe function further disorients anyone standing on the business end.

Jumping back to the present, the TLR-2 HL has shown itself a tough unit so far.  With an IPX4 rating for water intrusion, you can expect the TLR-2 HL to hold out against the usual moisture-related issues you may have while hunting in thick woods on a rainy day, including dropping it into a creek for a short bit.  My T&E TLR-2 HL has shrugged off worse abuse than my hunting gear is subjected to, and still looks brand new.  Spending an hour laying in a shallow stream?  Still turns on.  Submerged in a 40° (heater broken) hot tub?  Still on.  Recoil?  Shrugged off.  That’ll do!

We all know flashlight technology has advanced leaps and bounds in the past decade.  We’ve gone from bulky incandescent bulbs to durable and tiny little LED emitters.  Battery life in general has improved, but the biggest performance increase has been in maximum brightness.  The lumens available to those who seek what goes bump in the night has seen generational increases.  What I like about the TLR-2 HL is that while the beam is very focused, it still throws enough splash to avoid the “bat signal” effect where everything outside of the illuminated cone is locked in darkness.

The activation levers are well done, making it easy to hit “momentary on“, “locked on” and “strobe his eyeballs until his retinas melt“.  A small metal peg-switch at the bottom of the unit lets you select between light, light/laser, and laser only.  Strangely, light/laser mode isn’t in the middle where it would be most intuitive.  A small matter though, as I don’t imagine most will find themselves switching between modes all that often.

The TLR-2 HL is what I’ve been looking for in a tac-light, a major upgrade for my aging illumination tech.  Easy to attach, exceptionally bright when used, a worthy contender!  With a street price of ~$325, I’d say the TLR-2 HL falls into the “buy once, cry once” category.  When it’s dark, you need light.  Nobody is bringing it quite like Streamlight!  Check it out.