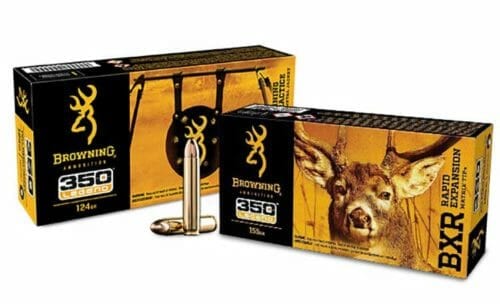 U.S.A. -(AmmoLand.com)- Arnold, Mo., (November 10, 2020) – In 2019, a new “Legend” was born: 350 Legend, a caliber that proudly claims to wield more power than the famous .30-30 and less recoil than a .243 Winchester. Better still, it is available at a surprisingly low price and is compliant for hunting in states that only allow straight-walled centerfire cartridges. But that’s not all. This caliber is also uniquely suited for use across multiple firearm platforms.

Many hunters and recreational shooters alike were immediately excited by the potential of this newcomer. After its first year on the market, it is clearly living up to its Legend namesake, and consumers are fervently jumping on the bandwagon.

Not one to be left behind, Browning Ammunition is proud to announce that their 350 Legend offerings are now available. The year 2020 brings two new options to 350 Legend fans with the introduction of an FMJ and BXR Deer load. Unique in the marketplace, this FMJ weighs in at only 124 grains and will be the fastest straight-walled cartridge in the world at a blazing muzzle velocity of 2500 fps (when fired from a 20-inch barrel).

“Browning is all about innovation and superior engineering,” said Ben Frank, Browning Ammunition brand manager. “This new caliber’s list of superlatives represents a rare achievement in a crowded ammunition space, and it’s something that we want to be a part of and add our own spin on.”

Winchester Ammunition is a proud supporter of the NSSF’s Project ChildSafe. For more information on the Own It? Respect It. Secure It.SM Initiative, please log on to: www.NSSF.org