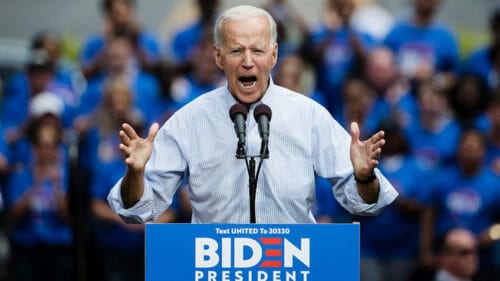 U.S.A. –-(AmmoLand.com)- Joe Biden and his media cheerleaders have declared his victory in the 2020 presidential election, and now tens of millions of law-abiding gun owners across the nation are more than a little nervous about his gun control plans, which the media carefully avoided discussing in the days leading up to the election, not even during the debates.

His so-called “Plan to End Our Gun Violence Epidemic” covers lots of bases. AmmoLand News detailed his scheme back on Aug. 21, and it hasn’t changed.

Still, Politifact has bent over backwards in an effort to downplay the threat, by insisting Biden has not called for a new tax on firearms as part of his proposal to regulate semiautomatic modern sporting rifles under the National Firearms Act. Under NFA, Politifact acknowledged Nov. 1, “He has proposed applying an existing federal law on machine guns to assault weapons — which can include semi-automatic firearms — and high-capacity magazines. That existing law includes a $200 tax. However, it’s ultimately unclear whether that tax would apply to all semi-automatic firearms, if it would be charged per unit or if existing gun-owners would be charged anything at all.”

Later in the statement, Politifact insists, “There’s also a question of how a Biden administration would define “assault weapons” — and whether it would include all semi-automatic firearms, as the post says. A Biden campaign spokesperson told us that the precise definition of “assault weapon” would be worked out during the legislative process.”

The answer to that might be found in the text of gun control Initiative 1639, approved by Washington State voters in 2018. Buried back on Page 27 of that scheme, which has since become law, is a definition for a “semiautomatic assault rifle.” Here’s how such a gun is defined:

“Semiautomatic assault rifle” means any rifle which utilizes a portion of the energy of a firing cartridge to extract the fired cartridge case and chamber the next round, and which requires a separate pull of the trigger to fire each cartridge.”

That would encompass literally any self-loading rifle ever manufactured anywhere on the planet.

After it was passed, Spokane County Sheriff Ozzie Knezovich told reporters there is no such firearm as a “semiautomatic assault rifle” and he theorized at the time the only reason a definition was made part of the law was so at some future date, anti-gunner could use it to take further action. That time appears to be looming on the horizon.

“Step two will be to ban all assault weapons. When they do that, they will ban every semi-automatic rifle there is,” he predicted.

The presumed president-elect almost immediately began talking about unity and bringing the country together. But Second Amendment activists wonder how he plans to unify the country when he wants to treat 100 million gun owners as second-class citizens by requiring “universal background checks” on all firearms transfers, limit firearm purchases to one per month, and giving owners of modern sporting rifles the option of either selling their guns “back” to the government or registering them under the NFA. It’s what many in the firearms community have dubbed “compensated confiscation.”

Another tenet of Biden’s plan the media carefully avoided during the campaign was his intention to provide incentives to the states to set up gun licensing programs. As explained in his “Plan,” Biden’s intent is to “enact legislation to give states and local governments grants to require individuals to obtain a license prior to purchasing a gun.”

The U.S. Supreme Court might have something to say about this because it this mandates licensing in order to exercise a fundamental right protected by the Constitution.

Also buried in Biden’s plan is the disarmament of teachers who have undergone special training in order to provide a first line of defense against school shootings. “We should be passing rational gun laws, not requiring educators who already have too much on their plates to also protect the safety of their students. Biden supports barring states from using federal dollars to arm or train educators to discharge firearms,” the plan specifies.

Still, President Donald Trump and Republican attorneys are preparing challenges to vote counts in several states, and there have been allegations of improprieties in several states including Georgia, Nevada, Pennsylvania, Michigan and Arizona.

And there is the potential for a GOP-controlled Senate to block any of gun control legislation proposed by Biden, despite threats to use executive action.

Finally, there is the Supreme Court with its conservative majority, which may prove itself to be Trump’s greatest legacy to the nation, provided Biden and Kamala Harris do not attempt to pack the court. If Republicans control the Senate, that’s not likely to happen, either.

The importance of maintaining even a razor-thin majority in the Senate has suddenly become paramount.