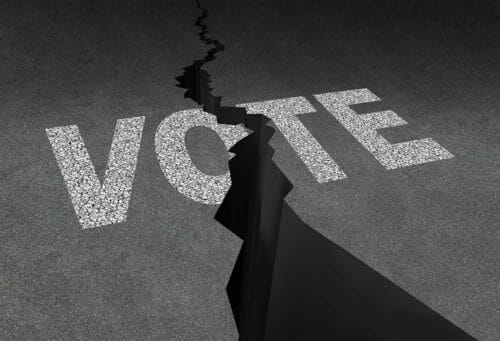 HENRICO COUNTY, VA –-(Ammoland.com)- When I checked the election results for Virginia late on Wednesday, I marveled at how pro-gun candidates picked up seats in the House of Representatives. This total included the very pro-gun Republican Nick Freitas from Virginia’s 7th congressional district.

Even though officials didn’t call the election at that point, Freitas was on the verge of unseating his Democrat rival, Abigail Spanberger, late Wednesday afternoon. He had over 1300 more votes than the former CIA official. Having spoken to Freitas before about gun rights, I was excited to see what he would do in Congress. I knew the GOA endorsed candidate would help protect our 2A rights from the rabid anti-gun crowd. 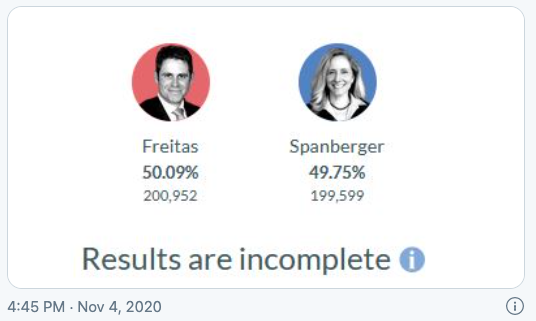 About 20 minutes later, Spanberger somehow overtook Freitas by over 5000 votes. I was shocked. How could that happen? It turns out that an election official “found” an overlooked flash drive mislabeled as “provisional ballots.”

Out of the 14,000 ballots, Spanberger won precisely 64% of the votes. She immediately declared victory, leaving supporters of the former Green Beret shocked. A lot of my friends in the area were upset at the outcome. Many wondered why poll workers stored votes on a flash drive marked “provisional ballots.” According to Henrico Registrar Mark Coakley, who found the drive, it was a cost-saving measure to store the live votes on a drive marked “provisional ballots.”

A flash drive of that size on Amazon goes for $5.75. Something didn’t seem right to me. It was like the old story of finding a box of ballots in a car’s trunk.

I decided to look into Coakley most closely. There is nothing too political in Coakley’s social media feeds or official statements. I am not accusing Coakley of doing anything wrong, but, in 2016, he did share a Russia Gate post. Since then, there was nothing political. Something seemed off to me about how sanitized the feeds appeared to be, so I decided to look into the people around him.

His wife Hilary Coakley, on the other hand, is involved in campaigning for Democrats. I was able to find proof that she made calls for Biden and Democrats running for Congress, including Abigail Spanberger. 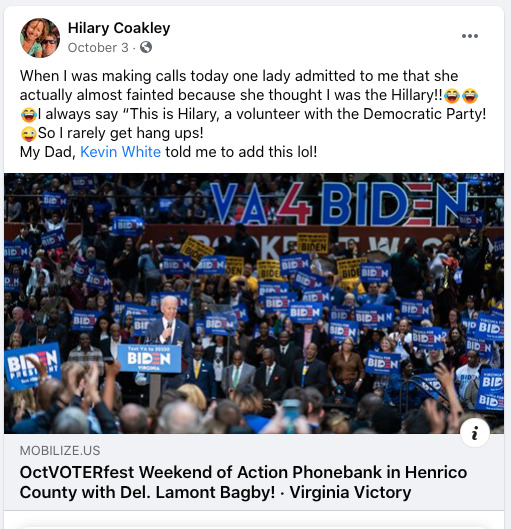 I am not a conspiracy theorist, but it seems odd that the man who found the flash drive that put Spanberger into the lead is married to someone who volunteered for Spanberger. I decided to call Mark Coakley to ask about the drives and his wife’s connection to the Virginia Democratic Party.

According to Coakley, Poll workers had ten drives, and they processed nine. The 10th had a filter on it, and that was the “found” drive. The workers reused the drive, according to Coakley. This version of events is different than what others have reported. I still have questions on the chain of custody. If I were the Freitas campaign, I would ask to examine the drive and the files on the drive. There should be metadata on the drive. Plus, when you delete files from a drive, it isn’t actually deleted and can be restored. This fact is especially true with solid-state drives like the ones used in this case.

When I asked Coakley about his wife’s connection to Spanberger and the Virginia Democratic Party, he said: “I can’t control my wife.”

As of this writing, Freitas closed the gap from little more than a 7000-vote difference to 4000 votes after requested canvassers found more “mathematical errors.” Canvassing will continue Monday in Henrico County, where Coakley found the drive. If the difference is less than 1000 votes, it will trigger an automatic recount.

AmmoLand News is aware of similarly found drives in Ohio and South Carolina. We are investing in those cases now. If our readers know of more occurrences like this in Virginia please contact us.

John is an NRA instructor and a constitutional activist. John has written about firearms, interviewed people from all walks of life, and on the Constitution. John lives in Northern Virginia with his wife and sons and can be followed on Twitter at @crumpyss, or at www.crumpy.com.