At Home, on the Street, and as You Drive – More Self Defense Gun Storie 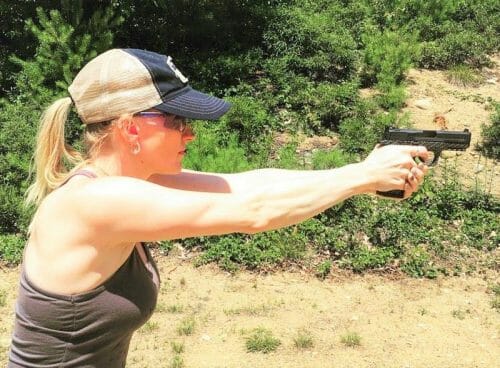 U.S.A. – -(AmmoLand.com)- You didn’t see this news covered by the mainstream media, but again this week, responsible gun owners defended themselves and the people they love. Self-defense instructor Andee Reardon joins the Self Defense Gun Stories Podcast to look at four new examples. Were these gun owners lucky, or were they well trained? (15-minute audio)

You’re sitting on your front porch. It is 10:30 at night when three teenagers come out of the dark and turn down the path to your home. One of them points a gun at you and tells you to hand over your wallet. You’re armed. You grab the gun next to you and shoot your armed attacker. He drops his gun and you stop shooting. The two other robbers run away.

Second Story- Are you armed in public?

You’re walking up the street at about 10:00 in the morning when a young man comes up to you. The man draws a gun and tells you to hand over your valuables. You’re a legal gun owner. You’re armed. You present your concealed firearm and shoot your attacker in the chest. The attacker turns away, and you run. You call 911 and wait for the police and EMTs to arrive.

You work for the District Attorney of Philadelphia. It is your job to talk to crime victims and make sure they have a say in the legal process. EMTs declare your attacker dead at the scene.

Third story- Are you armed at home?

You are at home with your three year old daughter. It is about three in the afternoon and you are trying to put her down for a nap. That is when you hear someone else in your house. You quickly close your bedroom door. You hear the stranger again so you go to your closet and grab your loaded firearm. The stranger tries to open the bedroom door, so you push your daughter into the bedroom closet behind you and close the closet door. Someone tries to open the closet door, and you shoot twice through the door. You hear someone run away.

A minute later, you open the door and call the police. The police search the area for your attacker.

Fourth story- Are you armed when you walk to your car?

Rob Morse writes about gun rights at Ammoland, at Clash Daily, and on his SlowFacts blog. He hosts the Self Defense Gun Stories Podcast and co-hosts the Polite Society Podcast. Rob is an NRA pistol instructor and combat handgun competitor.

The post At Home, on the Street, and as You Drive – More Self Defense Gun Storie appeared first on AmmoLand.com.