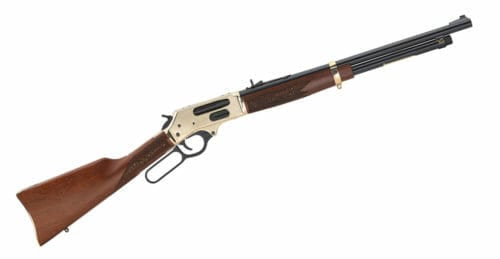 U.S.A. -(AmmoLand.com)- Henry Repeating Arms was founded in 1996 by Louis Imperato and his son, Anthony. Their first model, the H001 in 22 LR, was shipped in 1997 and has become a classic and staple of the company. We bought one as soon as possible and still use it today, over 20 years later…… it has never failed to load and still shoots accurately.

The Henry motto back then was “Made in America and Priced Right”. Well, they have lived up to that motto, and in response to so many companies shipping jobs overseas, they initiated a new motto: “Made in America or Not Made At All”. In this day and age of imports, that is important to us, and it should also be to our readers.

From the original Henry 22 LR, the line has expanded over the years to include the Big Boys and Long Rangers in a variety of big-bore pistol and rifle calibers. The number of variants is too numerous to list them all here, so one needs to head to the Henry website to check them out.

Then not long ago, Henry decided to introduce a lever-action shotgun. Some folks wondered if such a gun would sell, after all, the famous Winchester 1897/1901 lever-action shotguns, were discontinued around 1920. So, the question remained for the market-place to answer: Is there a niche for a high-quality lever-action shotgun in the world today? In our opinion, and a lot of other folks, the answer is YES.

With that in mind, we asked Henry to send us their new side-loading brass framed H024-410 shotgun. One might legitimately ask why a 410 bore? The answer to that question is easy. First, for rabbit and small bird hunting, the 410 is great (it does take some skill). Second, it is ideal for folks who are sensitive to the recoil from larger bore shotguns. And finally, it does make a fine “home defense” piece that anyone in the family can comfortably use. We will address the home defense aspect shortly.

The side-loading Henry combines their standard removable tube magazine for safe unloading and a side loading gate to keep the magazine topped off with up to five 2-1/2” .410 shells. The gun incorporates the standard Henry rifle sights, their fully adjustable semi-buckhorn rear, and ivory bead front sight. Together, they provide a very accurate line-of-sight aim for consistent results.

The barrel of this Henry resembles a “standard” Henry barrel. In other words, it is not the thin barrel found on a typical shotgun. The barrel is a cylinder bore choked, which translates into an open bore from chamber to muzzle. We had some doubts about how the Henry would perform with home defense loads; however, our tests quickly put those to rest.

For home defense loads, we selected the Winchester PDX1 that incorporates three plated discs which measure 0.40” x 0.24”, and weigh 70 grains each (3=210 grains) backed up by 12 plated BBs with a muzzle velocity of 750 f.p.s. In addition to the Winchester PDX1 rounds, we tested the Federal Personal Defense rounds with four 000 buckshot and a velocity of 850 f.p.s.

The targets were set up at 20 yards, a bit farther than most home defense situations would dictate, but we wanted to determine how well the cylinder bore barrel held the loads together. In both instances, the patterns proved more than adequate.

These are very impressive groups. In our opinion, more than adequate for home defense. However, as good as the targets look, they do not simulate actual damage. For that we went to Steve, The Kentucky Patriot, who tests his rounds with packages of pork ribs. Now, please don’t laugh…. uncooked pork is tough by itself and when you include the ribs, you have a good idea of the damage these rounds can inflict. We believe that Steve’s tests are more realistic than ballistic gel. As such, go to his YouTube channel, The Kentucky Patriot (https://youtu.be/OjhoJ1TcJfc) and you will be impressed with these rounds.

This Henry shotgun performed superbly in the field. It never failed to chamber a round or eject an empty hull. It is both beautiful and reliable. One cannot ask for more.

We are really looking forward to shooting this shotgun as it has tremendous potential.
ARE YOU READY?

About Jim and Mary Clary:

Jim and Mary Clary have co-authored over six hundred published articles (and counting) on shooting and hunting. You can read many of them on AmmoLand News. 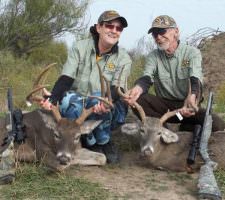 The post The Clary’s Review the .410 Henry Lever-Action Shotgun appeared first on AmmoLand.com.