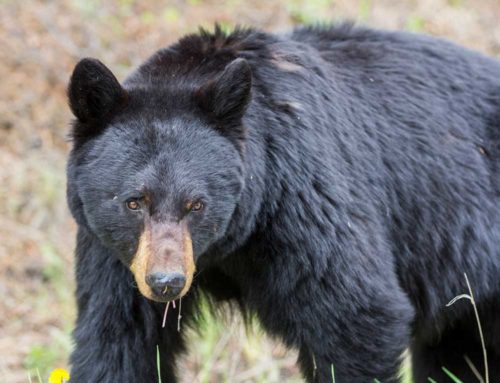 New Jersey – -(AmmoLand.com)- I remember ambling along a path, bags of popcorn and peanuts in my hands, taking in the more comfortable air as the dog days of summer waned.

It was August 28, 2016, and my wife and I, along with my sister, her family, and my sister-in-law, and her family went to the Popcorn Park Zoo in Lacey New Jersey.  The Popcorn Park Zoo is not so much a zoological garden in the traditional sense, as it’s more than that.  It is a rehabilitation and type of retirement home for abused/handicapped animals and or those that are not fit for release back into the wild.  The popcorn and peanuts were for feeding the animals, where we can guess the menagerie got its name.  Most of the animals ate the popcorn, but the peanuts were for the bears.

We rounded a corner, to where the bears were kept and were greeted, if you want to call it that, by several women hassling guests to get them to sign their petitions.  I looked up and saw signs that read “Christie, Stop The Bear Hunt” and things of that nature.  If we were in the zoo after October 17th of that year, I bet there would be signs that read “Justice for Pedals”, in reference to a semi-famous bear known for walking on his or her hind legs, from New Jersey that was assumed harvested during that year’s hunt.

I sighed to myself, my wife shot me a look (as in please don’t engage), and I tried to make no contact with the women harassing the guests.  Luckily for me (and my family), they grabbed hold of a young man that did engage with them and started their spiel “Will you sign our petition to Governor Chris Christie to stop the bear hunt?”  The man paused and said “No.”  To which they countered “Why not, do you hunt?”  And his reply “Yes.”  They continued “Do you hunt bear?” In volley, “I don’t hunt bear.  But why would I want to stop others from doing so?”  The man’s remarks are a grand mic drop for so many things in life.

“No, I don’t do that.  But why would I stop others from doing so?” – a wonderous freedom centric ideal to behold.

If what you are doing is bothering no one, then why should someone else interfere with what you are doing?  Or vice versa, if your neighbor is doing something you don’t agree with, what difference does it make if he or she is not harming you or another individual?  Ah, but the bears?!  They are harming the bears!?  I did say, INDIVIDUAL.  As if the bears are completely innocent concerning the need to manage them…

After my trip to the menagerie, I penned a letter to the Associated Humane Societies, the group responsible for the management of the zoo.  The letter was a semi cathartic shaming of the group for allowing petitioners to approach guests inside the zoo.  We paid money, a donation to the Associated Humane Societies, in order to gain entry to said property, and in return, I did not believe it was too much to ask that my family and I do not get harassed – and yes, it was harassment.  Especially by those who’s politics, I do not agree with.  I did not sign up for that.  Not on my leisure time, sorry.  Now, had they been in the parking lot or outside the zoo, I would still be perturbed, but hey, we didn’t pay to get into the parking lot.  My letter read in part:

“I do have a question to you concerning your not for profit status and also about any funding you may receive.  Is the practice of pushing a political agenda, not outright being disclosed to the people acceptable given your tax-free organization in the state?  I personally was not informed that when I paid for my ticket that I would be either supporting and or exposing myself and my family to rhetoric that I do not agree with.  What affiliation do these activists have with the zoo?”

I thought it was fair game to question that, no?  I also took the chance in my letter to question the mechanics behind petitioning the executive versus contacting our legislators:

“…there are a number of bills out there concerning bear hunting.  A statutory change of section 23 of New Jersey law would fortify their intentions versus an executive/administrative change.  I suggest these activists support the writing of our legislature.  Our legislature is very irrational and I’m sure they would get behind a bill that would have devastating effects, ie the stopping of the bear hunt.”

I further explain myself and inject my own personal biases:

“I’m not going to say that I will cease my support of the Popcorn Park Zoo, however, I will say that I do not agree with having people jam their political views down my throat while I’m trying to enjoy a Sunday afternoon.  As for the other numerous hunters these people approached,  hope that they have a similar attitude that I do and do not outright boycott the zoo because of party politics.  Given that, I do appeal to you to maybe consider not having such protests/activists present in the zoo, especially since the zoo is situated in what I would consider a very pro-hunting area….”

Did you catch my personal biases in there?  Let’s look closely at them:

“As for the other numerous hunters these people approached, hope that they have a similar attitude that I do and do not outright boycott the zoo because of party politics.”

Thankfully, Christie did not act to thwart conservation efforts.  In fact, both Christie and the full Department of Environmental Protection were in favor of the bear hunt.

Fast forward to November 4, 2020, and the radical Murphy Admin.

In New Jersey, the public hearing on the proposed 2020-2021 Game Code Amendments will be held virtually.  This is the hearing where changes to the rules are discussed.  This is not a lawmaking session.  Be quite assured that the changes being brought up are not based on law, voted on by the legislators, but however through Executive “suggestions” (read that how you will) from Murphy to the Department of Environmental Protection.  More executive overreach.  It is important to note that a “no bear hunt” bill has continually failed to meet acceptance over the years.  See Murphy’s 2018 Executive Order banning bear hunts on state lands for more executive shenanigans.  Murphy is just working to completely put the nail in the coffin of the bear hunt in NJ.  In 2018, you did not need a crystal ball to know what would come next, complete ban.

Why the bear hunt is important can be illustrated by not only other states that are overrun by bear populations, as noted in this article from Connecticut “Record numbers of bears are entering Connecticut homes this year”, but issues directly occurring in New Jersey.  Yes, you read that correctly, “bears are entering…homes”.  In New Jersey encounters with bears have not only been damaging but also deadly. New Jersey and nearby Pennsylvania have the largest Black Bears in America at 800 plus pounds.

One such tricky case involved a man from Sparta, NJ shooting a bear that was on his 2nd-floor deck, as well as two cubs.  The case proved to be a murky situation, as the cubs were on the ground, while the sow was doing her thing above terra firma.  The case resulted in both criminal and civil issues for the man.  Other cases of citizens in New Jersey using firearms against bears in self-defense have occurred, and always with drama (charges) attached.  A more “in your face” visceral situation involved a Rutgers student in 2014.  As reported in “New York Times”:

“The student, Darsh Patel, 22, and four friends were hiking on Sunday in the Apshawa Preserve in the northern part of the state, about 40 miles from New York City. They encountered a black bear, which began to follow them, according to the police in West Milford, a township that includes the preserve.

The friends told the police they scrambled to get away from the bear, all running in different directions. Four of the men later found one another, and they called the police to help search for their missing friend, according to the authorities. Mr. Patel’s body was found about two hours later.”

The West Milford Police Department said in a statement “Evidence at the scene indicated that the victim had been attacked by a bear.”  Read, “eaten.” And one more thing, New Jersey law regulates carriage and use of pepper spray with so many conditions it is basicaly a ban. Want proof just try and order bear spray on Amazon and have it shipped to NJ. They wont allow you to check out.

We had, have, and will continue to have a bear problem in the state of New Jersey.  Responsible and wise conservation efforts need to be employed and part of those efforts involve hunting.  Good, bad, or indifferent, hunting plays a crucial role in wildlife management.  In a state where hunting has continued to be on a decline, why would Murphy’s administration try to completely stop the few that are willing to help to cull the number of bears?  Look at the deer population as to why a diminished number of ethical hunters is an issue.

What can you do?

Tune into the Game Code Amendments Proposed Public Hearing November 4th, 2020. And potentially more important than that, write in and have recorded your views on the subject.  Written comments are due by December 4th, may be submitted online or via regular mail to:

Or the following online form can be used to communicate your thoughts:
2020 Game Code Public Comment Submission

In addition to that, make your opinion known to Governor Phil Murphy.  Tweet at him @GovMurphy or try reaching out to his office: (609) 292-6000.  Tell him your thoughts on what the end of the bear hunt would mean and your thoughts on him in general.