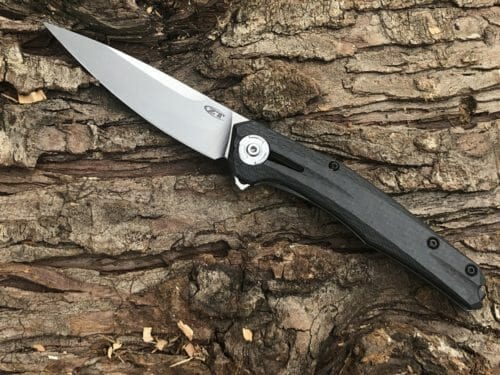 U.S.A. –-(AmmoLand.com)- It strikes me as a little funny that while most knife companies (or really, any manufacturer) name their products in addition to giving them SKUs, Zero Tolerance does not.  A catchy name is a good marketing tool, giving a memorable moniker to help a product stand out in a busy market.  I think that Zero Tolerance’s proclivity towards numeric SKU’s (such as today’s 0707) gives them a little bit of a James Bond vibe.  Considering that ZT’s market is clearly aimed above the entry-level crowd, a bit of intentional obfuscation can work toward their benefit as consumers can enjoy a feeling of exclusivity and intrigue.  All of that is of course second-fiddle to quality, which is what today’s review aims primarily at covering.  Ladies and gentlemen, the Zero Tolerance 0707.

Zero Tolerance’s 0707 is a feature-packed knife.  Let’s cover the tech specs as provided by ZT, then I’ll break down some of the features.

Let’s talk about the Zero Tolerance 0707 from a “first impressions” standpoint.  2.3 ounces.  That’s a laughably lightweight.  Titanium frame, a carbon fiber handle slab and an incredibly thin blade profile make this about as heavy as a mosquito sneeze.  It may surprise some of you to hear that a lack of mass doesn’t equate to a flimsy platform.  This knife is well-constructed, and rigid in every direction.  There’s no wiggle in the blade-to-frame lockup.  The frame lock is tighter than a gold digger’s purse.

As mentioned, the blade is really thin.  This, combined with the choice of CPM 20CV, means that the Zero Tolerance 0707 can run scalpel-sharp. Though this steel has a good rating for toughness, the slender shape screams “stick to the meat, avoid the bone”.  And cut meat it does!  The 0707 turns t-bone into cubed steaklets quickly.  This is impressively sharp and handles well.

The two-position pocket clip on the 0707 is described as “extra-deep carry”.  I’d have to say that’s accurate, as the clip itself clings on to the last inch of the frame, storing the bulk of the 0707 deep in pocket.  Drawing the 0707 out isn’t immensely difficult or anything of the sort, but it is a bit slow given just how little you’re able to grab onto initially.  For a general-purpose EDC this is just fine, but if you’re planning on a potentially defensive EDC carry, this is a consideration for you.

The flipper on the 0707 is classic Zero Tolerance.  Just a little flick of the finger and the blade deploys smoothly and locks up securely.  The frame lock itself is a real “Goldilocks”, as it releases the blade with just a little pressure horizontally, but not so little that you’ll unlock the blade inadvertently.  Just right.

So far the 0707 has shown itself to be a extremely capable EDC blade, when limited to cutting tasks.  That may sound a little silly for a knife, as cutting is its reason for being.  I usually subject my thicker EDC’s to all manner of improper abuses, prying and torqueing various items around the homestead in my impatience to go get the right tool.  With such a thin blade, I don’t want to risk attacking the Zero Tolerance 0707 in the same manner, but I had to give it more than camp-kitchen duties.  I started off with light-duty, like carving down a nice yellow cedar chunk into shavings for the fire.  I ended up batoning the blade into the firewood to split it, which is definitely past the intended use for this sharp little cutter.  This blade slices like a razor, but is far more durable.  This is everything you want out of a focused-use tool.  It excels in its intended function, and has the durability to match performance step-for-step.

If you’re looking for the one pocket tool to do it all, go get a nice multi-tool.  If you want a folding pocket-scalpel that’s just itching to slice and dice, definitely do yourself a favor and check out the Zero Tolerance 0707.  Street price on the 0707 is $248.  Check it out!