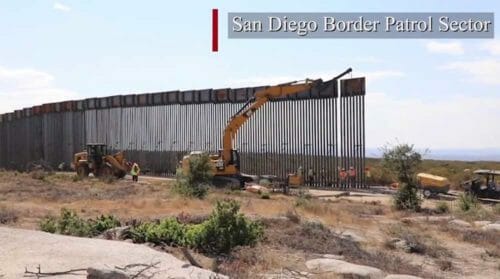 WASHINGTON – -(AmmoLand.com)- Today the Department of Homeland Security (DHS) and U.S. Customs and Border Protection (CBP) celebrated the construction of nearly 400 miles of new border wall system, in high priority locations across the Southwest border under the Trump Administration.

Since CBP began constructing border barriers nearly 30 years ago, these barriers have proved to be a critical component in gaining operational control of the border. Deploying the wall system in high priority areas allows U.S. Border Patrol to decide where border crossings take place, not smugglers, and where to deploy personnel and technology in complement to the border barrier.

“The progress we are celebrating here did not happen by accident. The many miles of border wall system exists because of the will and vision of President Trump, and the dedication and hard work of the men and women of DHS, the Army Corps of Engineers and our colleagues from across the Administration, said Acting Secretary Chad Wolf. “While this is an important milestone, we are building even more wall. Currently, we have nearly 210 more miles under construction, and we expect to complete 450 miles by the end of the year.”

“Today is an historic day for the American people and for the Trump Administration, defying all those who said it couldn’t be done,” said Acting Deputy Secretary Ken Cuccinelli. “The celebration of 400 miles of border wall system is a testament to President Trump’s leadership and this Administration’s commitment to secure our southern border and build an effective border wall system that protects all Americans.”

“The border wall system is Exhibit A in showing that the Trump Administration is serious about border security,” said CBP Acting Commissioner Mark Morgan. “This wall saves American lives. Every single bit of concrete and steel that goes into the ground stops dangerous people and deadly drugs from coming into this country.”

“We are shutting down illegal border crossing points with the new border wall system,” said U.S. Border Patrol Chief Rodney Scott. “For too long, the smugglers had the upper hand in choosing where and when they smuggle their contraband, and that will no longer be the case.”

Today, construction is averaging approximately 10 miles per week of completion.

The new border wall system is helping to secure the Southern border from illicit cross border activity and is encouraging lawful entry in a safe and legal manner through available ports of entry. The system is designed to enhance national security and increase safety of Border Patrol agents.