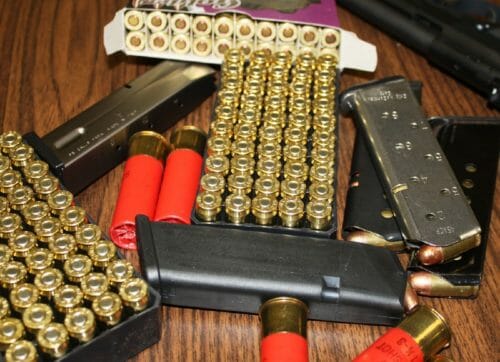 U.S.A. –-(AmmoLand.com)- Federal legislation introduced in September by perennial anti-gun U.S. Senators Dianne Feinstein (D-CA) and Bob Menendez (D-NJ) may not have a chance in Congress right now, but it may be a warm-up effort that is already being hailed by the gun prohibition lobby as a way to place restrictions on perfectly-legal businesses, and even publications, that deal with or discuss on-line firearm and ammunition sales.

Their S. 4718 is a short bill, but it could have far-reaching consequences, depending upon how it is implemented.

Here is the full language:

“To amend title 18, United States Code, to make fraudulent dealings in firearms and ammunition unlawful, and for other purposes.

Be it enacted by the Senate and House of Representatives of the United States of America in Congress assembled,

This Act may be cited as the “Stopping the Fraudulent Sales of Firearms Act”.

(2) by adding at the end the following:

“(A) to import, manufacture, or sell a firearm or ammunition by means of false or fraudulent pretenses, representations, or promises; and

“(B) to transmit or cause to be transmitted, by means of wire, radio, or television communication in interstate or foreign commerce, any communication relating to the importation, manufacture, or sale described in subparagraph (A).”.

According to Lawrence Keane, senior vice president and general counsel at the National Shooting Sports Foundation, S. 4718 is bad news, something akin to the proverbial “camel’s nose under the tent.”

“This is an attempt to weaponize the Soto decision,” Keane said, “to turn truthful advertising gun control groups don’t like into a crime and a basis for ATF to revoke licenses. It is designed to and would chill First Amendment protected commercial speech pertaining to the lawful commerce in firearms and ammunition products and create a basis for suing industry members gutting the PLCAA.”

The PLCAA is the Protection of Lawful Commerce in Arms Act of 2005, passed by Congress to prohibit junk lawsuits against firearms manufacturers, distributors and retailers for the misuse of their products.

In a press release announcing their joint legislation, Feinstein asserted, “While some technology companies have banned selling firearms and ammunition on their websites, the problem persists. Our bill would make it illegal for gun sellers to circumvent websites’ terms of service and continue the underground proliferation of firearms. It’s part of a larger effort that needs to be taken to stop the plague of gun violence in our communities.”

Critics contend the language of this legislation will make it possible criminalize any online advertising for firearms or ammunition, a common practice in today’s business environment. Major firms or online publications such as Brownells, Bass Pro, Cabela’s, Sportsman’s Guide and even AmmoLand News could be targeted.

The gun prohibition lobby has been quick to support the measure. They were quoted news releases from both Feinstein and Menendez.

“Internet marketplaces like Facebook are the virtual dark alley where unscrupulous gun sellers go to meet dangerous individuals who are trying to get their hands on a firearm,” said John Feinblatt, President of Everytown for Gun Safety. “Stopping these illegal sales would save lives, and we applaud Senator Feinstein for introducing legislation to do exactly that.”

“Overwhelming majorities of Americans support policies that ensure that individuals who should not possess firearms are not able to purchase them, including online,” said Kris Brown, President of Brady. “Brady is grateful to Senators Feinstein and Menendez for addressing a dangerous practice of falsely advertising firearm sales online. Such sales are designed to circumvent the regulations that help keep our families and communities safe. This is a common-sense fix to a growing problem that applies the spirit of our nation’s existing gun safety laws to novel, 21st century issues.”

While The Feinstein-Menendez legislation may get no traction this year, its introduction could be a test to see what chances it might have in a future Democrat-controlled Congress, with a Democrat in the White House willing to sign such a bill.

Companion legislation was introduced Oct. 5 by Congresswoman Mary Gay Scanlon (D-PA). She, Feinstein and Menendez cranked out boilerplate comments essentially demonizing the firearms industry, and they all appeared to be remarkably similar.

“The fact is, no matter how many times big tech companies claim they’re cracking down on illegal online firearm sales, determined gun sellers and buyers find new ways to get around it,” Sen. Menendez asserted. “With this bill, we are making very clear to gun sellers who are caught illegally moving their weapons online: if you make the sale, you will pay the price.”

“We hear time and time again from big tech companies that they are cracking down on illegal, online gun sales, yet this problem persists, and has extended far beyond traditional websites and is now present on social media platforms,” Congresswoman Scanlon echoed. “This bill would make it illegal for gun sellers to circumvent websites’ terms of service and continue the underground proliferation of firearms. It’s part of a larger effort that needs to be taken to stop the plague of gun violence in our communities.”

Feinstein’s remark appears cut-and-pasted out of the same playbook: “While some technology companies have banned selling firearms and ammunition on their websites, the problem persists. Our bill would make it illegal for gun sellers to circumvent websites’ terms of service and continue the underground proliferation of firearms. It’s part of a larger effort that needs to be taken to stop the plague of gun violence in our communities.”